Mini-Interview with The World

The World, an online public radio program from the BBC, did a brief audio interview with me last week, and it appeared in today’s edition. Here’s a direct link to the 4-minute piece [MP3 download].

To visitors from The World, the work I do on Chinese lessons is actually on a separate site called ChinesePod. Check it out; it’s the best way to learn practical spoken Chinese.

In the interview I talk about my struggles with the pronunciation of Mandarin Chinese, (basically very similar to what I’ve covered in my pronunciation section). There are other features of interest to the student of Chinese in the language section of Sinosplice.

Thanks a lot to Dan Washburn for pointing The World’s reporter my way. 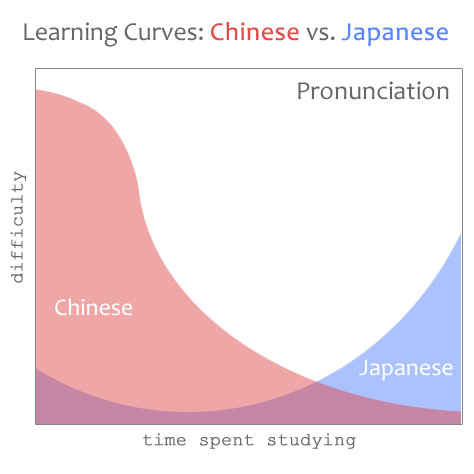 I’ve been asked many times: Which is harder to learn, Chinese or Japanese? Well, the latest time finally inspired me to make this graphic. I think it’s pretty self-explanatory, but some notes will follow anyway. In case you couldn’t figure out from the graph, both are difficult, but in different ways. Both have insane writing systems and lots of cultural background to learn, so those basically cancel each other out. Any language requires lots of vocabulary memorization. Japanese has loads of loanwords from English, but really learning to use the loanwords like a native speaker instead of a crutch is not so easy to do, so I left that factor out as well. For me, the major points of comparison come down to just pronunciation and grammar.

Japanese pronunciation is quite easy at first. Some people have problems with the “tsu” sound, or difficulty pronouncing vowels in succession, as in “mae.” Honestly, though, Japanese pronunciation poses little challenge to the English speaker. The absolute beginner can memorize a few sentences, try to use them 20 minutes later, and be understood. The real difficulty with Japanese is in trying to sound like a native speaker. Getting pitch accent and sentence intonation to a native-like level is no easy task (and I have not done it yet!).

Chinese pronunciation, is, of course, maddeningly difficult from the get-go. It can be so hard to make yourself understood when your sentence is only three syllables long. Yes, I know. I’ve been there. If you keep at it, though, things get waaayyy easier. And in the later stages, accent isn’t as big a deal in Chinese. There are so many wildly different accents in China alone that once you get your tones under control and can string a coherent sentence together, Chinese people will often assume you’re a native speaker in telephone conversations.

Chinese grammar starts out fairly simple for English speakers. Some find it so simplistic that they say things like, “Chinese has no grammar.” This is not true, of course, and there are a few difficult points to master (like 了, which probably occupies a good chunk of the red area in the middle of the grammar graph), but overall, the grammar is not too rough. If you want true mastery of the language, however, you will also eventually have to study 古文 (ancient Chinese), and that’s quite a bit more work.

Japanese grammar starts out seeming like some bizarre alien code. However, through hard work and determination, the persistent can eventually crack it. Once you get over the grammar hump, and verb conjugations, causative-passive, は and が, and keigo are no longer a big deal, you’re in a pretty comfortable place. But it sure is rough at first.

Just to be clear, this is all based on my personal experiences as a very acquisition-conscious language learner, not on scientific research. Please feel free to add your own experiences with these two languages in the comments. No, not THAT kind of contractions…

Typically, the symptom goes something like this. Given this sentence:

A typical Chinese college student will read this:

> I am a college student.

A typical Chinese college student will read this:

Obviously, these are not heinous mistakes, but it does make me wonder why for something so simple, the students don’t just read what’s written there.

Common sense tells me it’s just a habit. The teacher once told them, “I’m” means “I am” and “he’s” means “he is,” and it was just easier to convert it over, in pronunciation as well as in meaning. And the teacher didn’t care.

Still, a part of me wants to link it to characters somehow (you can’t contract 我是 or 他是**), or some “deeper” reason. I have to mentally smack that part of me… contractions are something of an ordeal for any learner of English; being Chinese has nothing to do with it.

If you’re teaching English, though, one easy way to help your students sound more native is to remind them to use contractions in their speech, or at the very least to get in the habit of pronouncing them correctly when reading them.

* Have any of the textbooks started to use the word “smart” instead of “clever?” They never did in my day, even when they claimed to be teaching “American English.”

Here’s a picture of a place near work where I occasionally eat: I have nicknamed it “Filthy Delicious.” The name says it all.

What’s interesting to me, though, is the name of the cuisine boldly painted in red on the wall: 麻辣汤. This is interesting because once upon a time I was under the impression that this was the correct name, but enough chastisement from Chinese friends converted me to the “real name”: 麻辣烫. And yet there it is, in red and white, on the wall in the picture (in traditional characters, which, as you can see, totally adds class).

The name 麻辣汤 makes sense, because the final character 汤 means “soup,” and the dish itself is a kind of soup. (As I’ve mentioned before, it’s sort of a spicy “poor man’s hot pot.”) The final character in the latter, “correct” one is 烫, which means “burning hot.” This makes a kind of sense, except that the name becomes then a bunch of adjectives without any noun (like “soup”) to anchor it. That noun would usually come last in a Chinese dish name (as in 麻辣汤).

So what’s going on here? I haven’t had time to research it (ah, the advantages of blogging!), but I suspect it’s about tones. The name “málàtàng” likely comes from a dialect where 汤 (soup) is read “tàng” rather than standard Mandarin’s “tāng.” This kind of thing happens all the time in China’s rich linguistic tapestry, and the questions raised go something like the following:

1. Can the character 汤 have the reading “tàng” as well as “tāng”? This is not ideal, especially if there is no precedent in standard Mandarin. This would amount to a “corruption” of the character’s original reading.

2. Can we change the pronunciation of “málàtàng” to “málà tāng” for consistency? This seems ideal except that it would never work. It’s awfully hard to control how people talk, especially after they’ve settled on something.

3. Can we change the character used to represent “tàng”? If it comes from a dialect, it likely doesn’t have a standard written form anyway. If we can find something similar in meaning, a practical compromise is reached.

It seems to me that in my imaginary scenario path #3 above was selected, and character 烫 did the dirty work. I call it “dirty” because while it is no longer “a corruption of the character’s original reading,” it is instead a semantic corruption. 烫 originally means “burning hot” or “boiling hot,” but now you’re making it mean “soup,” or, if you choose to put it another way, you’re making it a non-semantic syllable in the three-character unit 麻辣烫. I don’t buy that, though, because the characters 麻辣 clearly keep the meaning of “numbingly spicy.”

If I have a point with all this, it’s that you can’t control the evolution of a language. Sure, a writing system need not necessarily do that, but when you encode individual characters with both semantic and phonetic information and then try to keep either from changing, you’re just kidding yourself. This is only a small example, but it’s a pretty widespread phenomenon now that the writing system is being used by the literate masses as a whole rather than a few elite (and the internet is certainly exacerbating the situation). Given enough time, so many characters will have their meanings muddled that the writing system will be reduced to the world’s most cumbersome “phonetic” system.

I’d be really curious to see what the written Chinese language looks like in 2000 years. It’s not going to look at all like it does now.

On Accents and Perceived Fluency

I’ve known for a while that for the highest perceived fluency, a foreigner should aim for a Beijing accent. That’s what Dashan did, and I’ve witnessed many times that a Beijing accent just impresses Chinese people more (especially outside of Beijing). It never had any appeal for me, though.

What I have noticed, though, is that as one’s accent improves, it can move through various levels of perceived fluency, seemingly imitating some of Greater China’s regional accents. I’ve actually heard Chinese people make some of these comments, and I cobbled together this rough guide to what the various comments mean.

These impressions are sure to vary somewhat from region to region (and yes, they are unfair, subjective generalizations). Anything I missed?

I recently got an e-mail from a beginner regarding tones in Mandarin:

> I was searching the web to find an answer with no luck. I read what you wrote about Debating “You’re Welcome” and I’m hoping you can help me.

> I keep finding different sources giving different tones for “bu keqi”. In Chinese for Dummies bu has a rising tone and keqi both have falling syllables. Another book gave a falling tone to bu, a flat tone to ke, and a rising tone to qi. Many websites tell me that I have the right words, but they don’t give the tones at all.

> If you have an extra minute, I’d also love to know the tones on the variants you wrote, or a good source to look them up at.

I realized that the author of the e-mail was confused because there is a rule in Mandarin Chinese that when when 不 precedes a 4th tone, it becomes second tone. Most textbooks will expect you to always remember this after they teach it, and will still mark 不 as 4th tone even though it should be read as 2nd tone. Some textbooks, however, mark 不 as 2nd tone when it should be read as 2nd tone. I can see how that could be very confusing to a new learner.

In responding, I wanted to include a link to a site which clearly outlined all the tones changes (AKA tone sandhi) that occur in Mandarin. I was disappointed that Wikipedia didn’t seem to have one. Eventually I found the rules outlined clearly in the Change of Tone section of a site called InstantSpeak Chinese.

I had never explicity learned Rule 3, regarding the “half third tone,” but when I thought about it, I realized it was true and that I even follow it. I guess I unconsciously acquired it.

Anyway, because I found them somewhat hard to find online, I’m going to reproduce the main tone rules here (leaving out the “half third tone” one) and add some examples to flesh them out a bit.

Again, it’s important for beginners to memorize these rules because textbooks will often not remind you. They usually provide words’ original tones before tone sandhi.

Related: my Chinese blog entry about lots of third tones strung together