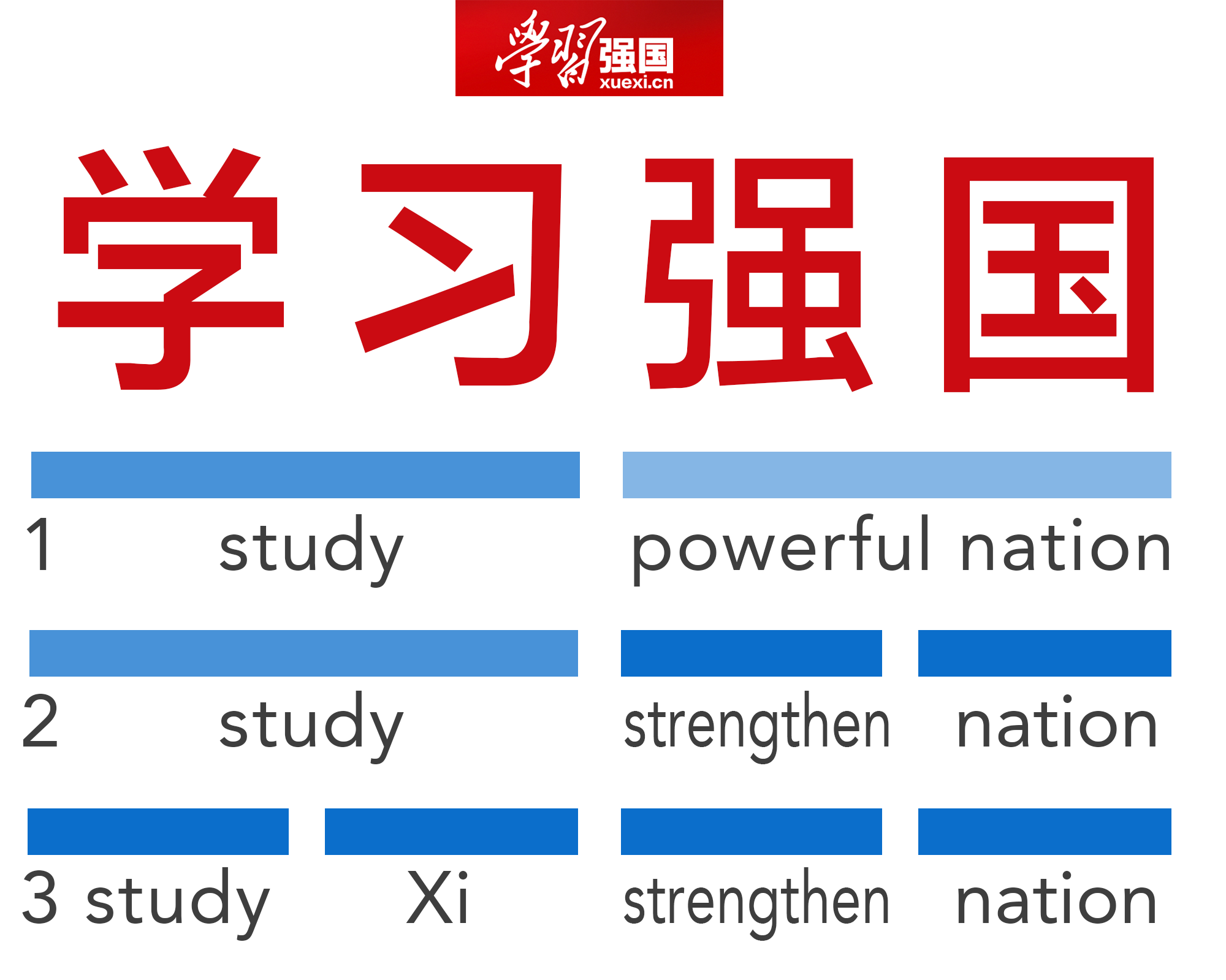 A recent topic of conversation among friends in Shanghai is the new app “Xue Xi Qiang Guo.” It’s a news hub for state-sponsored news and commentary, as well as a way to show devotion to the Chinese Communist Party by studying what’s in the app and proving mastery through quizzes. In this way you can get points which can earn you nominal rewards, and it also ties into China’s “social credit” system. (For more info on Xue Xi Qiang Guo, you can check out its official site as well as the Wikipedia’s article.)

What I want to talk about today is the name: 学习强国. If you plug that into Google Translate, Wenlin, or Pleco, you get a similar two-word breakdown: 学习 强国 (xuéxí qiángguó). You’ll note that English news coverage of the app (including Wikipedia) all write the name in pinyin as two words: “Xuexi Qiangguo.”

But this is Chinese, where clear word boundaries are not provided, and that is not the only breakdown. It’s not even the one that occurs first to most native speakers of Chinese.

OK, so 学习 is a given. it means “study,” and it’s certainly in keeping with the spirit of the app. No problem there. The word 强国, meaning “powerful country,” however, is not so common. The overall interpretation here seems to be “learn from the powerful country (China),” which seems plausible, but it’s just not what occurs to Chinese users first. So let’s drop the 强国 parsing (which, unfortunately, seems to be the norm in English language coverage of the app) and see what else we can get.

Classical Chinese was remarkably flexible, most words consisting of individual characters that can serve as various parts of speech in different contexts (noun, verb, and adjective fluidity being common). This trend carries over to modern times for certain words, and 强 is one of them. So while 强 used by itself is most often used to mean “strong” in modern Mandarin, in certain contexts, 强 can also mean “strength” or “strengthen.” So from there, we can get the two-word phrase 强 国 (qiáng guó), “strengthen the country.”

There’s one other unofficial, sly interpretation which goes unnoticed by few Chinese these days. The word 学习 can also be broken down into two separate words. Since the first character, 学, can mean “study” on its own, and the second character, 习, is also the surname of Xi Jinping (president of China), you can also interpret 学 习 as the phrase “xué Xí,” which means “study Xi” or “learn from Xi.” A quick look at the content of the app shows that this interpretation is, indeed, fully grounded in reality. In fact, some are calling the app the “Little Red Book” of the modern age.

In this parsing, the final meanining of 学 习 强 国 would be “Studying Xi Strengthens the Country.” Since cause-effect relationships are often implied in Mandarin, you could also make that a command: “Study Xi to Strengthen the Country.”

Pretty clever name. It is indeed an age of 学 习 (xué Xí). Now there’s an app for that: Xue Xi Qiang Guo.

Nov. 25, 2019 Update: Dr. Victor Mair shared with me his take on this app, which he wrote on Language Log way back in May of this year. I would have linked to it originally if I had been aware of it: The CCP’s Learning / Learning Xi (Thought) app I was quite amused to stumble upon a whole array of fake (but humorous) Chinese documents last weekend. The documents adopt the official style of Chinese 证书 (official documents), but the names are a lot more fun. Here are the three I bought (for 5 RMB each): The three types of documents above, left to right, are:

The insides even look official, with space for a photo: For comparison purposes, here are some real Chinese certificates, collected from the internet:

I can’t imagine the government will be particularly happy about these things, especially with the Expo looming. I wouldn’t be surprised if these became scarce really quickly (especially in Shanghai).

Looks like my Flickr photos aren’t showing up for the time being; you can thank the GFW for that. The photos are viewable via proxy.