Monkey King: Hero Is Back and Cultural Gaps

I recently watched a Chinese movie called Monkey King: Hero Is Back in English, or 大圣归来 (Da Sheng Guilai) in Chinese (full name: 西游记之大圣归来). The name 大圣 is short for 齐天大圣, which is another name for 孙悟空, the “Monkey King” character from Journey to the West (西游记).

Have I lost you yet? This is actually a pretty good movie, with high-quality animation, but it’s written for a Chinese audience, and as such has a lot of cultural assumptions built in. Although I’m generally familiar with the story of Journey to the West (西游记), it’s a classic that every native-born Chinese person is intimately familiar with from childhood, so foreigners trying to understand the story are at a bit of a disadvantage. (I’m going to provide all the Chinese characters and pinyin for Chinese learners like I always do, but the following info should still help even if you’re not studying Chinese. Mouse over characters for pinyin.)

Pretty much every Chinese person, young and old, knows that Journey to the West has 4 main heroes (plus a horse). One annoying thing is that each character has multiple Chinese names and multiple English translations of those names. The names given in parentheses (in bold) are the ones I hear used the most by Chinese friends. 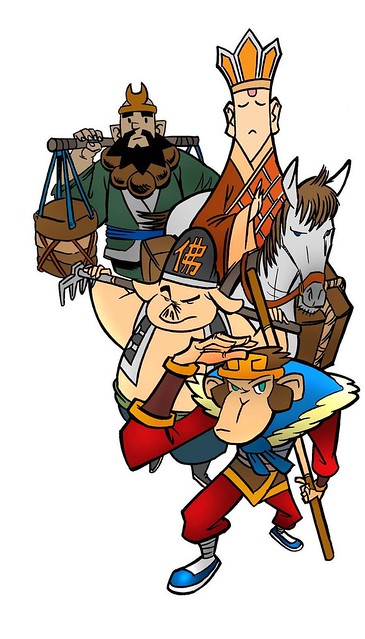 OK, now how do these traditional characters fit into the new movie 大圣归来 (Da Sheng Guilai)? That’s key to understanding it. I won’t give any real spoilers, but the following are a few important notes that all Chinese viewers understand immediately, which should clear a few things up for foreign viewers: 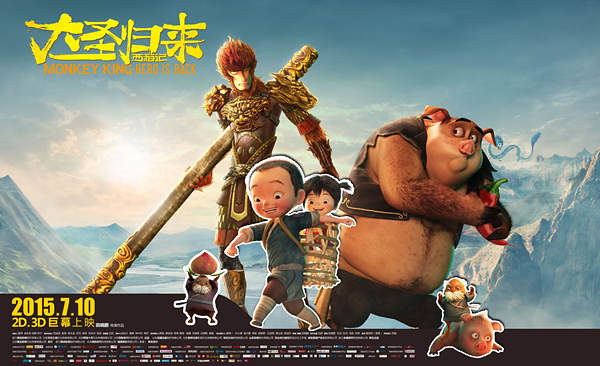 If you’re studying Chinese, I recommend you check out this movie. It’s pretty easy to follow even without the above information, but it’s nice to know how it “plugs into” contemporary Chinese culture.

I hope the forthcoming English-dubbed version is better than this:

Music video with scenes from the movie:

Hypothetically speaking, in a rewritten Chinese version of Great Expectations which takes place in modern China, Estella’s name should definitely be 冰冰. But what about Pip? Suggestions welcome! (His name in the typical Chinese translation is 匹普, which is horrible, and we’re certainly not using.) 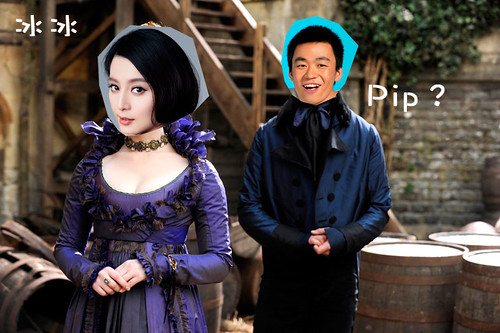 (I will neither confirm nor deny that this question is related to Mandarin Companion‘s next release, which may or may not be the first Level 2 book.)

China, the Country of the Blind I recently read H.G. Wells’ short story The Country of the Blind, and it immediately struck me how relevant this story is to western visitors of China in modern times. If you’re a China observer, and an observer of how westerners interact with China, it’s definitely worth a read.

If you’re too busy to read a short story (and it’s not overly sci-fi, for those of you not into the genre), you might check out the plot synopsis on Wikipedia.

Here’s an excerpt to give you a taste:

> “Why did you not come when I called you?” said the blind man. “Must you be led like a child? Cannot you hear the path as you walk?”

> “There is no such word as see,” said the blind man, after a pause. “Cease this folly and follow the sound of my feet.”

> “You’ll learn,” the blind man answered. “There is much to learn in the world.”

> “Has no one told you, ‘In the Country of the Blind the One-Eyed Man is King?'”

> “What is blind?” asked the blind man, carelessly, over his shoulder.

> Four days passed and the fifth found the King of the Blind still incognito, as a clumsy and useless stranger among his subjects.

> It was, he found, much more difficult to proclaim himself than he had supposed, and in the meantime, while he meditated his coup d’etat, he did what he was told and learnt the manners and customs of the Country of the Blind. He found working and going about at night a particularly irksome thing, and he decided that that should be the first thing he would change.

There really is a lot there to appreciate. Read the original.

On a related note, Kaiser Kuo has recently stated:

> On my podcast not long ago, Evan Osnos suggested that the best way to understand China today is to read Mark Twain—specifically “The Gilded Age” and “Life on the Mississippi.” Paul Mozur from the WSJ did just that and concurs. I’m now reading “The Gilded Age.” Yep.