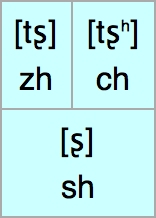 X is the Unknown

Do you remember “solving for x” in math class? When you first started algebra (or was it pre-algebra?), you had to learn a whole new set of methods which, when applied, could magically reveal the values of the unknown variables.

So when you saw this:

…before long you could handily solve for x. And once you had x, you could solve for y. Then z was a piece of cake too.

Chinese pronunciation is similar. We native speakers of English of English have to learn to produce some new sounds in order to become fluent speakers of Chinese. Although the pinyin “r” sound is formidable, what I’m talking about today are the sounds linguists call “alveolo-palatals“: the three Mandarin consonant sounds pinyin represents as “x,” “q,” and “j.”

So how are the sounds of Mandarin like algebra? Well, just as the in the above algebra example one would first solve for x, then solve for y, and finally solve for z, learning those “alveolo-palatals” involves a similar chain effect. Once you’ve solved for “x” (I’m talking the pinyin x here), “q” and “j” both become relatively simple. “X” is definitely the one you want to start with, though, for many reasons. X is the unknown. First solve for “x,” and “q” and “j” are within your grasp.

There are a number of reasons to start with “x.” First of all, it’s a prominent feature of the Chinese word almost everyone learns right after “nihao” (你好). Yes, the word is “xiexie” (谢谢), the Chinese word for “thank you.”

Second, the “x” consonant contains the basic feature you need to build on to learn “q” and then “j.” Just as solving for x in the algebra equations above allows you to solve for y with a simple operation, the same is true for pinyin “x” and then “q.” Allow me to explain.

The True Nature of X, Q, and J

If you’ve studied phonetics at all, you learn IPA (the international phonetic alphabet). The main idea behind IPA is that as nearly as possible, every unique sound is represented by a unique symbol. So one good way to know if a sound in a foreign language is really equivalent to a sound in English is to check their respective IPA notations.

In English, for example, the “sh” sound isn’t actually an “s” sound plus an “h” sound. We just write it as “sh.” In reality, it’s a sound different from all the other sounds in the English language. It gets its own IPA symbol: ʃ. Makes sense, right? Now, a lot of new learners to Chinese think that pinyin “x” is the same as English’s “sh.” If that were true, the IPA symbols for the two sounds would be the same. But they’re not.

If there is any doubt that the pinyin “x,” “q,” and “j” sounds are foreign for speakers of English, you can look up the IPA for the sounds of Mandarin Chinese. Don’t freak out, now. The alien symbols representing pinyin’s “x,” “j,” and “q,” are, respectively, ɕ, tɕʰ, and tɕ.

Now take a look at those three consonant sounds again: ɕ, tɕʰ, tɕ. The common element is ɕ. That’s the “x” sound. This sound does not exist in English; “x” is the unknown. But the addition of the other sounds, which are not foreign to English speakers, will result in the “q” and “j” sounds.

So, once again, master that “x” sound, and you can unlock the other two. It’s practically “buy one get two free,” but you definitely have to pay for the “x,” and you may need to struggle a bit. [More info on producing this sound here.]

It’s worth it, though. Before long you’ll leave “syeh-syeh” behind and utter “xièxie” perfectly. Just solve for “x” first.