There Can Be Only One Lunch Time

After having lived in China for over 13 years, how has China changed me? Some changes are more subtle than others. 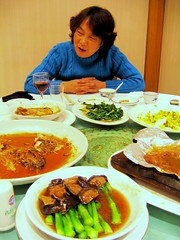 Here’s a short exchange I had with a friend recently:

> Him: What time do you eat lunch then? You’ve been in China too long…

It’s true that the Chinese are pretty rigid about their eating schedules, and now I realize that I have been reprogrammed. I think of 12pm as “the lunchtime,” with deviations as early as 11:30am or as late as 12:30pm acceptable.

Recently I had an evening meeting with an American AllSet Learning client that wrapped up around 10pm. He and his wife (also American) went out for dinner after the meeting, and I was a little incredulous that that was normal for them.

I realized that I now think of 6:30pm as “the dinnertime,” with deviations as early as 6pm or as late as 7:30pm acceptable.

This cultural norm for mealtimes also affects my business. Occasionally AllSet Learning clients want to do 2-hour Chinese lessons starting at 11am or 5pm. Those time slots make it impossible for the Chinese teacher to eat lunch or dinner at an even remotely acceptable time, so I have to explain that for cultural reasons, those are bad times for lessons.

I’m not sure exactly how “Chinese” my eating habits are, or if they’re sort of a hybrid of my original American ways and my Chinese life. One habit I’ve yet to “go native” on is breakfast. I like some Chinese breakfast (煎饼 in particular), but I frequently skip breakfast. This, of course, horrifies Chinese friends.

I think I used to fight this kind of change, these insidious creeping ideas that attempt to slowly win over my brain. This one is kind of hard to fight, though. The stomach wants what the stomach wants, and China’s been whispering in its “ear” for quite a while now.