The following is a guest post by “Prince Roy.” If you’ve been following the blogosphere for a long, long time, you might recognize the name and remember his China blog, which was hosted on the (now defunct) Sinosplice blogging network. He also wrote the guest article Integrated Chinese (Levels 1, 2): A View From the Trenches on Sinosplice as well. In this post he’s going to share his personal experiences learning Vietnamese in preparation for being stationed there by the U.S. State Department, after having already learned Mandarin Chinese years ago to an advanced level.

When John asked me to comment on my experiences learning Vietnamese and Chinese, I was happy to oblige, because it allows me to try and wrap my head around what I’ve been through since I began studying Vietnamese last September (8 ½ months ago now). In the interests of full disclosure, I studied Chinese for a total of five years, and have spoken it now almost 25 years.

I will cut to the chase: Vietnamese is enormously more difficult than Chinese. Hands down. It’s not even close. Some of you may recall a seminal essay by David Moser: “Why Chinese Is So Damn Hard”. I had the pleasure to meet David recently (his Chinese is superb, by the way), and here’s some unsolicited advice for David and anyone else who might agree with him: if you think Chinese is hard, steer far, far clear of Vietnamese. I studied both languages in a very intensive environment, but when I recall my (much greater) proficiency in Chinese after the equivalent period spent learning Vietnamese, I can only cringe in shame at my Viet inadequacy. True, this is just my own experience, but don’t take my word for it—every person I know who has studied both languages sings the same sad song—Chinese is far easier than Vietnamese in every way except, just maybe, reading. Why is this? Here are a few general thoughts:

This is the big one. It is hard to imagine two sound systems more diametrically opposed than English and Vietnamese. Every aspect of Vietnamese phonology is hard. Vietnamese has single, double and even triple vowels. Few of them are remotely similar to English, and just the slightest mispronunciation will result in an unintended vowel. This, compounded with the tones, can easily render one’s speech unintelligible or worse.

The pronunciation of a consonant can change depending on whether it occurs at the beginning or end of a word. There is a multitude of nasal and glottal sounds that don’t exist in English or Mandarin. In southern Vietnamese, the dialect I am learning, people often pronounce ‘v’ as ‘y’—to add to the confusion, ‘d’ and ‘gi’ are also pronounced as a ‘y’ sound’. The consonant pair that has given me the most difficulty is t/đ (different from the ‘d’ above). In normal speed speech, I cannot distinguish them; in the language lab only if I listen very closely. Here’s a real-life example of why this is so critical: a very common dish in Vietnam is phở bò tái—rare beef pho. But when I pronounce this in Vietnamese, my teachers say they hear ‘phở bò đái’, literally ‘cow piss pho’. Oops. Umm…waiter? 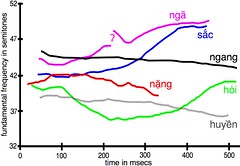 Like Chinese, Vietnamese is tonal, but the similarity ends there. The northern (Hanoi) dialect has 6 tones; the southern (Saigon) has 5. Thankfully, I’m learning the Saigon dialect, because that extra tone of the Hanoi dialect is a ‘creaky’ tone which has the effect to my ears like nails on chalkboard. I had hoped my experience with Chinese would prove beneficial—the tones in Mandarin always seemed somewhat intuitive to me, even from when I first began to study the language. Not to say I am completely error free, but tones were never problematic for me to the degree they often are for other students.

Having spoken Chinese for so many years, I plead guilty to tonal transfer, but in my own defense, tones in Vietnamese are more subtle, and for me, not nearly as intuitive. Two that give me a lot of trouble are the dấu huyền and dấu nặng tones (low-falling and low-dropping), particularly when occurring consecutively and spoken at conversational speed. Also, the dấu sắc (high-rising) tone is tough for me, because I tend to produce it like the second tone of Mandarin, which is wrong. However, tones are the least of my worries in Vietnamese; I think they will come more naturally after I arrive in Vietnam this August. And at least my teachers tell me I sound tonal when I speak, albeit with a somewhat pronounced Chinese accent.

Vietnamese, like Chinese and English, is an SVO language. But that is its only concession. Vietnamese grammar is the most difficult aspect of the language after pronunciation. Similar to Chinese, sentence particles are a very important grammatical component, but Vietnamese takes this to a stratospheric level of complexity. I also believe Chinese is more flexible than Vietnamese—in the former, once you learn a particular sentence pattern, you can pretty much plug anything into it, and while it might not be the way a native speaker would say it, they will often understand you. Not so in Vietnamese. Phrase memorization is more useful than patterns, because if you don’t say it exactly like a Vietnamese does, you will usually encounter a blank expression on the face of your listener.

Another characteristic of Vietnamese is it boasts an extraordinary number of synonyms. Chinese is rich in synonyms too, of course, but the difference is that in Chinese, you might commonly encounter two to three of them in typical popular usage. In Vietnamese, it seems people like to use all of them.

But all is not lost

Vietnamese is indeed a very rich, complex language—in fact my classmates and I have an inside joke: Tiếng Việt rất phong phú (Vietnamese is a very rich language) = Vietnamese is really, really hard. But there is an upside for those with a Chinese background when learning Vietnamese. Due to the roughly 1000-year period that Vietnam was a colony of China, Chinese had an enormous influence on the Vietnamese language. I can determine a Chinese cognate in up to 60% of the vocabulary I’ve learned to this point. Its close relationship with Chinese is both a blessing and a curse, however. A blessing, because I can often correctly guess the meaning of words when I encounter them in a text, and a curse because that close relationship makes it harder for me to take Vietnamese on its own terms—and this language, like its people, is fiercely proud and independent. I feel as though I am treading water in Vietnamese, and my facility in Chinese allows me to, just barely, keep my nostrils above the water. That’s why I’m in awe of those among my classmates who are making good progress in Vietnamese without the benefit of Chinese. It makes their achievement all the more amazing.