The 3 “de” in Popular Culture 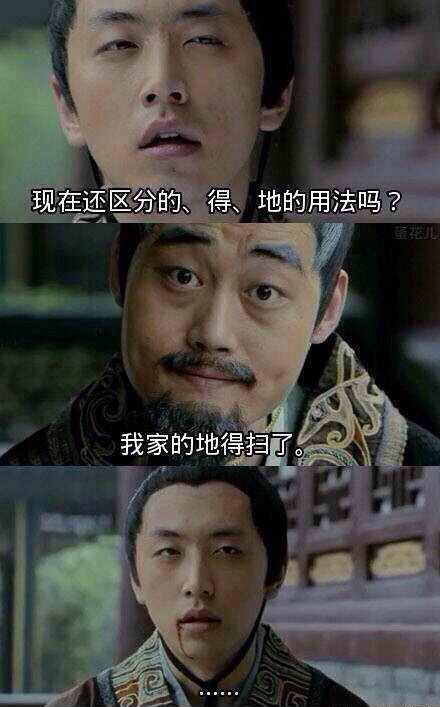 1. First Guy: 现在还区分的、得、地的用法吗？ [Nowadays do we still distinguish between the usage of the three de‘s?] 2. Second Guy: 我家的地得扫了。 [The floor in my home needs sweeping.] 3. First Guy: ……

OK, truth be told, the second guy is cheating. While he did use all three “de” characters, he used two of them as different words from the structural particles that comprise the “three de‘s.”

The words he used:

So he used all three “de” characters (in a row!), but they weren’t the structural particles the first guy was talking about.

In reality, the question which set up the joke is a good one: nowadays, do native speakers of Chinese distinguish between the “three de‘s” when writing?

The answer is yes and no. Professional writers certainly do. Teenagers texting their friends are typically pretty lazy and won’t pay much attention to the distinction (frequently over-using 的). Because so many people are typing these days, and predictive text isn’t so good at differentiating the three de‘s, lots of errors creep into common usage (in texts, on WeChat, on blogs, etc.), and everyone is used to seeing them. Some native speakers will even tell you that the distinction is unimportant.

So if you’re trying to write proper Chinese, then yes, you should pay attention to the distinction. If it’s just casual texting, no one is going to be horrified when you use the wrong de.