The Beauty of Chinese Numbers

The beauty of Chinese numbers is that they are consistent. You learn the rules, and they just work. Even if you try to get flippant and say 一十 for “10” instead of just regular old 十, no one’s going to get upset.

The consistent beauty of Chinese numbers is made all the more obvious by the relative skankiness of numbers in English. I noticed this because my daughter (now somewhere between 2½ and 3 years old) has pretty much mastered all the numbers to 100 in Chinese, but the teens in English continue to stump her. She can count to 20 no problem, but if you ask her to read a random two-digit number that starts with “1” in English, that’s where the trouble starts. If she’s speaking Chinese, she can read either Arabic numerals or Chinese characters all the way to 100, but doing it in English trips her up especially for the range 11-20. She’s actually much better in the 60-90 range, because they’re regular.

If English numbers were totally regular like Chinese, we’d see these little gems (pretty much all of which my daughter has tried to pull off at one time or another): 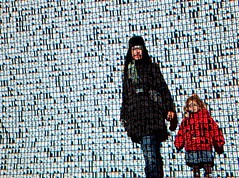 Somehow I missed it my whole life, but one of the things that makes the names of the teens so bizarre (aside from the inexplicable “eleven” and “twelve”), is that the digits are represented backwards, only for these 7 numbers. When you see “36” and read it “thirty-six,” the “thirty” corresponds to the 3 on the left, and the 6 to the “six” on the right. So you’re reading the number, digit by digit, left to right. But for numbers like 14, 15, and 16, not only do they sound like 40, 50, and 60, but the order of the syllables better matches 40, 50, and 60 as well. And both the “-ty” and the “-teen” from those numbers originally represented “10,” right? These pairs are essentially pronounced as if they were the same numbers! Confusing as hell. I feel for my daughter.

Fortunately kids don’t realize they have good reason to be frustrated, and just jeep on truckin’.