A Pun for Mooncake Day

Today is Mid-Autumn Moon Festival in China, so here’s a little moon pun for you: 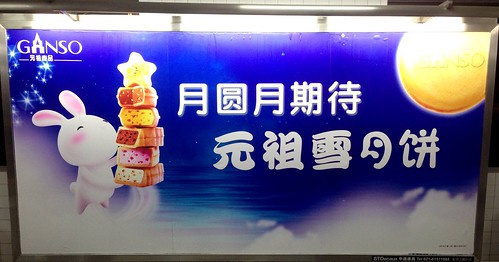 The first line is where the pun resides. It reads:

> 月圆月期待 [moon round moon looking forward (to it)]

This is pretty nonsensical because the character for moon, “月” has replaced the identical-sounding character 越. Most intmermediate learners will recognize this character as being part of the 越……越…… pattern.

So the meaning is:

> 越圆越期待 [The rounder it is, the more you look forward to it]

Still seems kind of nonsensical to me (in this context, anyway), but it’s just a lame pun for a billboard.

The brand an product is: