I recently gave a talk to some Chinese teachers about IB and AP Chinese programs in the US. In my research for the talk, I did quite a bit of reminiscing about my own 4 years in the Hillsborough High School IB Program. I had all but forgotten about “CAS hours,” and I seriously can’t remember at all what my “Extended Essay” was on. But one thing I totally haven’t forgotten about was “Theory of Knowledge.” That class was seriously cool!

It’s also a nice talking point for Chinese teachers, who are always eager to hear about how western schools systems foster creativity and independent, critical thinking. Theory of Knowledge fits in nicely there.

But the truth is that Theory of Knowledge would be far too little, too late if that’s all our school systems did to try to encourage independent, critical thinking. And it’s not exactly “creative” either. Those aspects of our western educations begin far earlier, even before we start school.

I was reminded of this the other day when I tried to buy a coloring book for my daughter. I had only two criteria: (1) it had to have lots of nice pictures to color (no text), and (2) it had to be cheap. Criterion #2 was the easy one. I had no idea I was apparently asking for way too much with #1. Take a look at what I found in the book store I went to:

Do you see a trend? In each book, the child is shown exactly how to color the picture. There’s a right way and a wrong way. (Oh, and also, you generally can’t just color without having new vocabulary forced on you.) I checked every single coloring book candidate in the children’s book section, and they were all like this. Not a single one just had blank pictures without “models” to follow. (Those models, by the way, waste a lot of space and paper, which could be more pictures to color.)

As if that weren’t enough, take a closer look at this picture:

At the top, that reads:

Coloring reminder: When coloring, be sure to use different colors for the different parts of the dragonfly’s body.

Why can’t a 3-to-4-year-old just color the dragonfly all one color? Well, because dragonflies are never a solid color in nature, of course!

What’s even more heartbreaking is what’s at the bottom of that same page:

That’s right. If you’re going to color a dragonfly, you have to put your name on it and claim responsibility for your crayon crimes, and then stand judgment for the objectively right or wrong colors you have committed to that paper.

I can imagine the harsh frowny faces the publishers would give a child that artistically attacked one of their pictures, American-style, and ended up with something like this:

To be fair, the kind of coloring book I was looking for does exist in China. In fact, I’ve bought one before at our local Carrefour supermarket. I was expecting higher quality and more variety at an actual book store, but instead, all I could find was this prescriptivist nonsense.

This is only a post about coloring books. I really wish this were the biggest problem with the Chinese educational system. 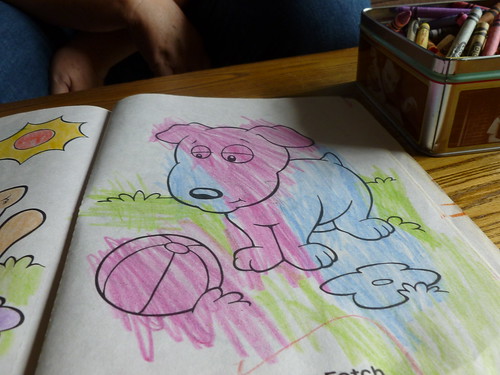 I suspect a coloring catastrophe of this magnitude could get you permanently banned from Chinese kindergartens.