Tone Corrections from a 3-year-old 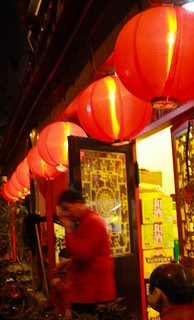 When my daughter was still learning to talk, she used to occasionally make tone mistakes, and this amused everybody. Now she’s almost 4, attending a Chinese pre-school, and her tones are pretty perfect.

The other day I was taking to her about a picture that featured a Chinese lantern (pictured at right). I was speaking in English, but for some reason I also brought up the Chinese word: 灯笼 (dēnglong). I pronounced it “dēnglóng.” Although those are the correct tones for those characters, I slipped up, because for this word, the second character should be read as a neutral tone: “dēnglong.”

She immediately pounced on my mistake. This is the first time she’s corrected me in a tone error, and she was delighted. (I’m sure I have many more years of this to look forward to…)

So then she was all, “ha ha, you said ‘dēnlóng’ instead of ‘dēnlong’…” and I noticed a mistake on her part. Instead of saying “dēng,” she was actually saying “dēn” (final -n instead of final -ng). I pointed this out, and she was, of course, incredulous that she, too, could be wrong. Looks like we’ll need to spend some time training that “thick Shanghai accent” out of her!

My daughter has also commented to me on how people from different countries pronounce English in different ways… I’m looking forward to having more linguistic conversations with my bilingual kid!