Wham! vs. Queen in China

OK, for some reason I was reading Wham!’s Wikipedia page a while back (yeah, I know), and I found this hilarious section:

In March 1985, Wham! took a break from recording to embark on a lengthy world tour, including a ground-breaking 10-day visit to China, the first by a Western pop group. The China excursion was a publicity scheme devised by Simon Napier-Bell (one of their two managers—Jazz Summers being the other). It culminated in a concert at the Workers’ Gymnasium in Beijing in front of 15,000 people. Wham!’s visit to China attracted huge media attention across the world. Napier-Bell later admitted that he used cunning tactics to sabotage the efforts of rock group Queen to be the first to play in China: he made two brochures for the Chinese authorities – one featuring Wham! fans as pleasant middle-class youngsters, and one portraying Queen singer Freddie Mercury in typically flamboyant poses. The Chinese opted for Wham!

It would be cool to see those two brochures, if they still exist. (They’re probably in hilariously bad Chinese, if in Chinese at all.) 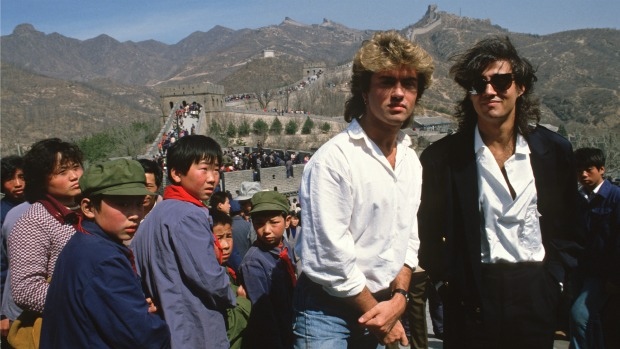 So how did the concert go? The Guardian gives an amusing account:

According to Simon Napier-Bell, the band’s manager, Michael tried to get the spectators to clap along to Club Tropicana, but “they hadn’t a clue – they thought he wanted applause and politely gave it”.

He said some of the more adventurous Chinese did eventually “get the hang of clapping on the beat, even learnt to scream when George or Andrew waved their butts”.

The diplomat reported that “there was some lively dancing but this was almost entirely confined to younger western members of the audience. Some Chinese did make the effort, but they were discouraged in this by the police.

Sounds like a blast. The tickets cost 5 yuan. Wham! did not enjoy it.