According to Wikipedia, subvocalization refers to “the internal speech typically made when reading.” It’s that “voice in your head” (you) pronouncing every word mentally. Subvocalization is normal, and is not generally considered a problem, unless you’re trying to learn to speed read. In that case. subvocalization is generally regarded as something that slows a reader down.

I found this section of Wikipedia quite interesting:

Advocates of speed reading generally claim that subvocalization places extra burden on the cognitive resources, thus, slowing the reading down. Speed reading courses often prescribe lengthy practices to eliminate subvocalizing when reading… [but] for competent readers, subvocalizing to some extent even at scanning rates is normal.

Typically, subvocalizing is an inherent part of reading and understanding a word. Micro-muscle tests suggest that full and permanent elimination of subvocalizing is impossible. This may originate in the way people learn to read by associating the sight of words with their spoken sounds…. At the slower reading rates (100-300 words per minute), subvocalizing may improve comprehension.

The Case of Chinese

OK, but now what about for Chinese? Chinese characters are not as directly tied to a phonetic system (like an alphabet), right? Plus Chinese kids learn characters by writing them over and over rather than by reading them aloud, right?

Well, not really. Here’s what research has to say (I added bold to certain parts):

…Reading English and reading Chinese have more in common than has been appreciated when it comes to phonological processes. The text experiments suggest that readers in both systems rely on phonological processes during the comprehension of written text. The lexical experiments show differences just where it is expected: Evidence for early (“prelexical”) phonology in English but not in Chinese, but evidence for still-early (“lexical”) phonology in Chinese. The time course of activation appears to be slightly different in the two cases. Thus, the similarity between Chinese and English readers is shown not in their dependence on a visual route, but in their use of phonology as quickly as allowed by the writing system.

So it’s not that Chinese readers don’t subvocalize; it just kicks in later, because it takes for time for readers to amass the knowledge of written Chinese needed. Interesting!

Obviously, you can dive a lot deeper into the research on subvocalization, reading comprehension, and cognitive differences between writing systems. (Please feel free to share links to relevant studies in the comments.) For my purposes, though, one important point is clear: there’s no need to exoticize reading Chinese any more than necessary. Yes, learning a bunch of characters is a hurdle, but you don’t really need to worry too much beyond that.

First of all, we should remember that subvocalization is not “bad,” and it’s not something that native Chinese readers don’t do (some kind of “laowai problem”). But that doesn’t mean that there’s no danger of over-reliance on subvocalization when learning to read Chinese.

I personally have experienced what I consider a serious impediment to my reading fluency. I found that when I would read Chinese a text, I was reading it aloud very deliberately in my head (subvocalizing). The problem was that I had obsessed over correct tones for so long that I just couldn’t stop. This slowed me down even more than normal subvocalization would be expected to do. So even when I was just reading for purely informational purposes, my brain was insisting that I had to pronounce every tone of every word (in my head) exactly right. I knew this was slowing me down a lot, but I couldn’t stop! The “tone police” in my head were out of control.

I did eventually get over this bad habit, and the result was much more rapid reading speed, as well as the ability to truly scan a text for meaning quickly. How did I do it? 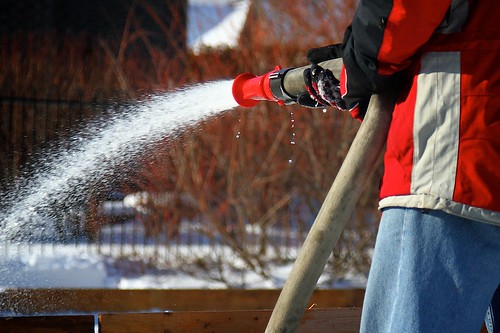 My solution was “the firehose.” I forced myself to read a lot. I read long Chinese texts for which I knew the words, but wasn’t sure of the tones for all the words. In some cases, I may not have even been sure of all the exact readings of all the characters in those words. But I could still comprehend the general meaning of the texts, which was all I needed.

So the steps were:

This worked, but I had to do it a lot, and to be honest, it was a little painful. Unlearning a habit is not easy, and if I’m not careful, I still find my brain dutifully reading aloud every single tone in my mind. But with just a little willpower, I can keep subvocalization in check when I need to, and greatly increase my reading speed.

The second solution is extensive reading. It’s a gentler version of the method described above. The idea is that if you know that you already know all the words (with correct tones) in a text, then forcing yourself to read it without focusing on the correct tones should be easier. No anxiety. You can let go and just read.

But here’s the key: you can’t just read a text first to identify all the words you don’t know, add the pinyin, and consider them “learned.” That’s not going to allow you to let go of subvocalization for unfamiliar texts. So you need to find reading material which is unfamiliar, and yet entirely composed of familiar words. This is what graded readers can help with.

I’d be very interested to hear about any readers’ struggles with subvocalization when learning to read Chinese. Actually, any foreign language… it’s all relevant.