Graded Readers and the Wall of Characters

I did another podcast! In this one I talk with my partner at Mandarin Companion, Jared Turner, about the challenges of learning to read Chinese and how graded readers can help. The podcast (62 min.) is called: Chinese Graded Readers and ER in Chinese.

We covered a range of topics related to extensive reading (ER) and learning Chinese, and even did a bit of comparing learning Chinese and Japanese. On topice I think worth mentioning is something I last mentioned in 2012:

Most Chinese learners have a goal of one day being able to read a Chinese newspaper, or a novel in Chinese. And thanks to better and better tools for learning Chinese, it’s getting easier to work towards that goal progressively. However, even learners who have studied for quite a while report that they still struggle with the “wall of characters” mental block. It’s that irrational, overwhelming feeling (perhaps even a slight sense of panic) we sometimes get when confronted with a whole page of Chinese text: the dreaded “Wall of Characters.”

No doubt, this fear is partly culturally rooted. From childhood, many of us have considered Chinese characters as roughly equivalent with the concept “inscrutable.” At times our brains seem to revert to that primitive, ignorant state where that wall of characters really seems impenetrable.

Nowadays, the “wall of characters” is often online, rather than printed on paper. We have all kinds of tools to help us chip away at the wall. Relative beginners, with the right training, can quickly start blowing holes in that wall, and with a little time and patience, the wall does come crumbling down at the feet of the motivated learner, leaving nothing but glorious meaning in its place. That’s a beautiful thing. 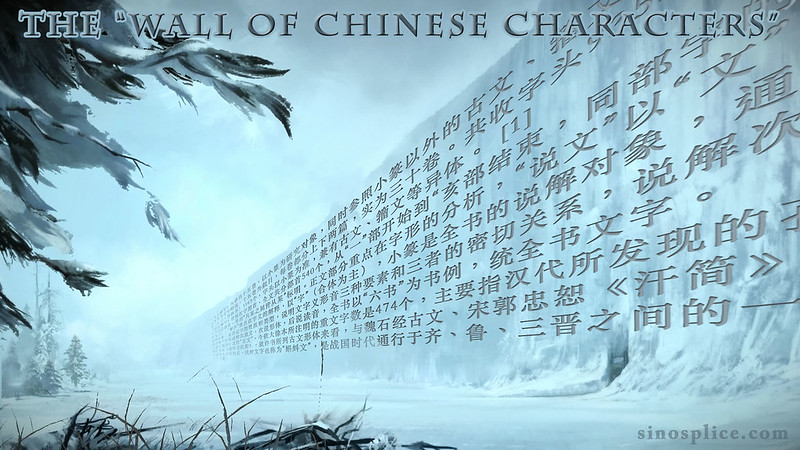 One of the things I talked about in the podcast (at around 17:50) is how Chinese graded readers also help learners to tackle “the wall.” Maybe certain tools are “blowing holes” in the wall as mentioned above, but graded readers present much smaller, realistic walls as intermediate goals. They prepare the learner for the ultimate task: being able to confidently and reliably scale that wall on a regular basis.

No matter what language you’re learning, you should give graded readers a try. They help “build fluency now” and give learners a great sense of satisfaction that learners (and Chinese learners in particular) might otherwise be forced years to get a taste of. More on this is in the podcast.