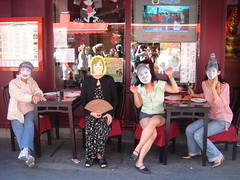 In the past, I’ve speculated on how the second language acquisition process contributes to changes in the personality of the learner. Recently an article called Multilinguals Have Multiple Personalities on New Republic caught my attention. It turns out it’s actually based on the same research as I quoted in my Cross-Cultural Marital Communication: Sacrifice, Identity, Choice post, but it’s still an interesting topic well worth revisiting (5 years later).

This time, rather than insights, though, I just have questions. I’m curious how my readers out there might answer the following:

1. Do you consciously try to create and/or maintain a different personality for your foreign language (FL) speaking identity?

2. If you don’t consciously try to create and/or maintain a different personality for your FL identity, how do you determine if your FL personality is any different from your native language identity?

3. If certain languages tend to influence personality in a certain way (as the New Republic article suggests), what personality traits would speaking Mandarin Chinese impart onto its non-native speakers?

Here are my own answers:

1. Yes, I did that. I could only keep it up for so long, though, before my fluency made me self-conscious about maintaining my more outgoing, chatty Chinese self. I suspect that some people might be able to keep it up, though, depending on the specific “personality modifications” and the degree to which they’re applied.

2. Even after I “corrected” my Chinese self, making it more like my English-speaking self, my two personalities aren’t going to be 100% the same, if the New Republic article is to be believed (and I believe it). Most people I know don’t have the language skills or the opportunity to make such a comparison. Maybe Jenny from ChinesePod is in a decent position to judge, but she knows me mostly from how I am at work. That leaves basically just my wife, who’s not a native speaker of English, but is still in a good position to judge. No way to get an objective assessment, though (short of participating in an official experiment)!

3. This is really hard to say. One way to judge might be to look at how expats in China relate to each other in China, compared to how they relate back home. For example, they may be less shy about asking someone how much they make (kind of a taboo in most western countries). So… speaking Chinese makes you nosier about money?? Not exactly insightful. Obviously, there are problems with the method, too. I’m especially curious what other people think about this: what personality traits would speaking Mandarin Chinese impart onto its non-native speakers?

Leave a comment and answer all three questions, if you have the time! (Insight into acquisition of any language is fine; it doesn’t have to be Chinese.)