We learners of Chinese typically learn that “ayi” (阿姨) means “aunt,” and then soon after also learn that it is also a polite way to address “a woman of one’s mother’s generation.” Then, pretty soon after arriving in China, we learn that it’s also what you call the lady you hire to clean your home. (The last one tends to become the most familiar for foreigners living in China.)

Today I’d like to bring up a fourth use of “ayi” which kind of circles back to the first one, but is also subtly different, and additionally extremely interesting in the way that it makes young women squirm in social discomfort. This is the use of “ayi” that you really only learn if you spend enough time around young (Chinese-speaking) children in China.

Many terms for family and relatives are used quite loosely in Chinese to show familiarity or politeness. The way it works for little kids in China is something like this:

3. Here’s where it gets interesting… To a little kid, if you’re female, but are no longer a child, you’re suddenly an ayi. This often violates the “mother’s generation” rule that we learn in Chinese class… If the kid’s mom is 34, the kid is usually still going to call a 20-year-old girl “ayi” because a 20-year-old is obviously not a child. (Note: this is largely based on observations in Shanghai; use of the term may vary somewhat regionally. China is a big place!)

But this is where it gets very amusing to observe… a lot of 20-year-old girls have never really been called “ayi” before and they hate it. It feels like they’re being called OLD. In very recent memory, they may have had younger cousins calling them “jiejie,” but now this little kid is suddenly pronouncing them NOT YOUNG ANYMORE. A lot of these 20-year-old girls will correct the little kid that calls them “ayi,” telling the kid to address them “jiejie.” Most of the time the kids will have none of it, though. You can see it on their faces: “What? You’re not a little kid. You’re clearly an ayi.”

So yeah, I’ve been observing my toddler calling strange young women “ayi” and watching these young women freak out. And yes, it’s pretty funny to me. 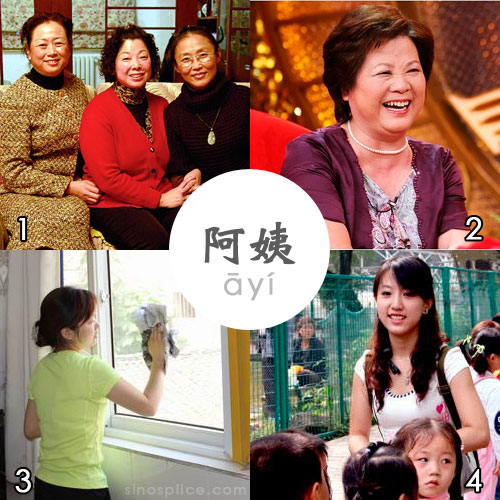 If you’re in China and you’ve never noticed it before, be on the lookout for #4. It’s easy to spot, because it usually involves a young woman in her early twenties approaching and fawning over a cute little kid, then the inevitable offensive “ayi” term is used, the failed attempt at “jiejie” persuasion, and the young woman walking away pouting.