Kaiser on North Korea and China

Kaiser Kuo answered a question on the relationship between China and Korea which included an analogy that was too good to pass up (I love a good analogy):

> What impression does the average Chinese person have of North Korea?

> Is it similar to the rest of the world or do they have a different view considering the relation of their government with North Korea? 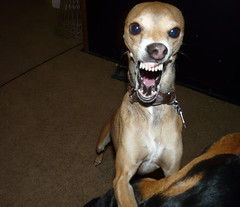 > I’m not sure about the “average” Chinese person, but nearly all the Chinese people I know feel a range of emotions toward North Korea that would include embarrassment, shame, pity, contempt, and outright hostility. It’s like a nasty dog that was already a family pet long before you were born: once upon a time, it wasn’t so crazy and bitey, and actually helped scare off would-be burglars and you were even kind of proud of what a tough little sonofabitch he was. Now he’s always barking, straining at the leash, trying to bite the neighbors (and ruining your relations with them), shitting all over the place, and costing you too much to feed.

See the question for the full answer (all two paragraphs of it).