An interesting article hit Hacker News the other day, relating to the Chinese model for innovation among hardware startups: From Gongkai to Open Source. The article uses the Chinese words gongkai (公开), meaning “open,” and kaiyuan (开源), meaning “open source.”

Here’s how it starts: 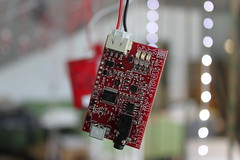 > About a year and a half ago, I wrote about a $12 “Gongkai” cell phone… that I stumbled across in the markets of Shenzhen, China. My most striking impression was that Chinese entrepreneurs had relatively unfettered access to cutting-edge technology, enabling start-ups to innovate while bootstrapping. Meanwhile, Western entrepreneurs often find themselves trapped in a spiderweb of IP frameworks, spending more money on lawyers than on tooling. Further investigation taught me that the Chinese have a parallel system of traditions and ethics around sharing IP, which lead me to coin the term “gongkai”. This is deliberately not the Chinese word for “Open Source”, because that word (kaiyuan) refers to openness in a Western-style IP framework, which this not. Gongkai is more a reference to the fact that copyrighted documents, sometimes labeled “confidential” and “proprietary”, are made known to the public and shared overtly, but not necessarily according to the letter of the law. However, this copying isn’t a one-way flow of value, as it would be in the case of copied movies or music. Rather, these documents are the knowledge base needed to build a phone using the copyright owner’s chips, and as such, this sharing of documents helps to promote the sales of their chips. There is ultimately, if you will, a quid-pro-quo between the copyright holders and the copiers.

> This fuzzy, gray relationship between companies and entrepreneurs is just one manifestation of a much broader cultural gap between the East and the West. The West has a “broadcast” view of IP and ownership: good ideas and innovation are credited to a clearly specified set of authors or inventors, and society pays them a royalty for their initiative and good works. China has a “network” view of IP and ownership: the far-sight necessary to create good ideas and innovations is attained by standing on the shoulders of others, and as such there is a network of people who trade these ideas as favors among each other. In a system with such a loose attitude toward IP, sharing with the network is necessary as tomorrow it could be your friend standing on your shoulders, and you’ll be looking to them for favors. This is unlike the West, where rule of law enables IP to be amassed over a long period of time, creating impenetrable monopoly positions. It’s good for the guys on top, but tough for the upstarts.