I was impressed by the “propaganda” handed to me in the subway yesterday. I had seen lots of elementary schoolers on the streets engaged in some sort of volunteer work, and then in the subway I experienced it firsthand. Here’s the flyer I was given: 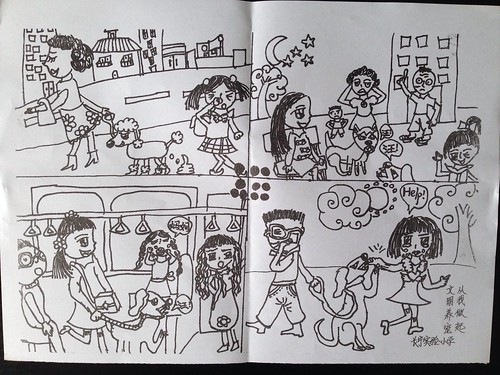 The “汪” represents the barking sound a dog makes in Chinese. (In panel 3, the little girls is saying “妈妈“, “mommy.”) The characters in the lower righthand corner read:

What impressed me was the idea that the school is (1) educating the kids to be “civilized” (文明), but also (2) trying to use the kids to influence the less civilized adults (who are arguably most in need of this type of education, but also prone to negatively influencing the kids). Made me think of the brilliant Thai anti-smoking ad that also used kids.

Here’s hoping these efforts pay off! We’d all like a “more civilized” Shanghai (with less dog poop).