I remember the first time I had the great idea to use Chinese children’s books as study material. I had been in China for about a year, and having exhausted my old textbook, I was starved for more interesting material. I came upon a book store, and, realizing how cheap books in China were, had the revelation that I should start learning from Chinese children’s books. It was so perfect, and so obvious… why hadn’t I done this earlier?!

Then reality came crashing in. There was a very good reason why I everyone wasn’t already doing it already: Chinese children’s books are meant for native speaker Chinese kids, and as such, they generally don’t make good material for foreign language learners. But why??

Before I talk about my conclusions as to why, let me just share a few examples from my local book store. This is no scientific survey, but I did my best to select from a number of different publishers and different types of children’s books. The pages I photographed are more or less random. I’m adding a few comments about the suitability of these stories for a high A2 (elementary) or low B1 (intermediate) learner. 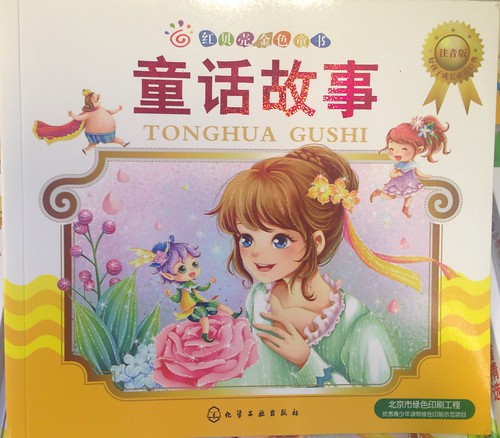 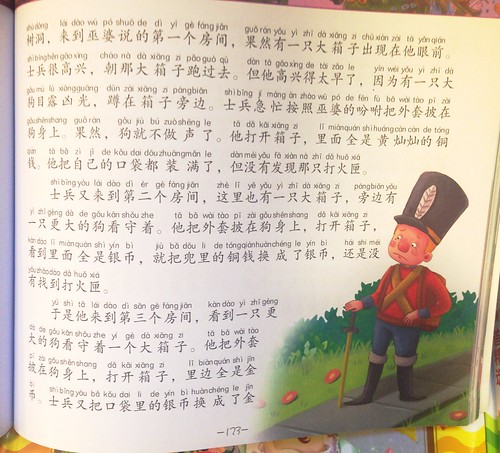 – Note the failure to break the characters into words, and the pinyin over every character… both annoying for a learner of Chinese.
– The tone is a more written, formal style than most elementary learners are going to be ready for.
– Notable difficult words: 果然、蹲、急忙、吩咐、目露凶光、黄灿灿、铜钱、打火匣、看守、披 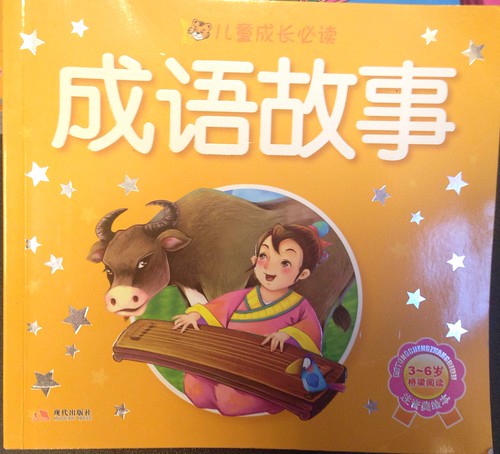 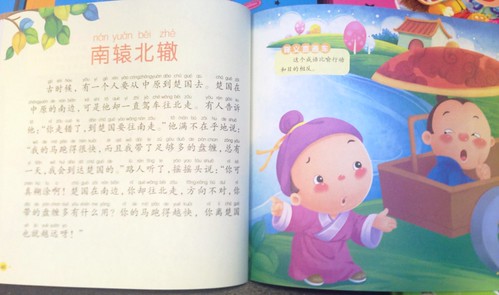 – Again, the failure to break the characters into words, and the pinyin over every character…
– The tone is a more written, formal style than most elementary learners are going to be ready for.
– Notable difficult words: 南辕北辙、中原、楚国、却、驾车、满不在乎、盘缠、摇摇头、糊涂、方向 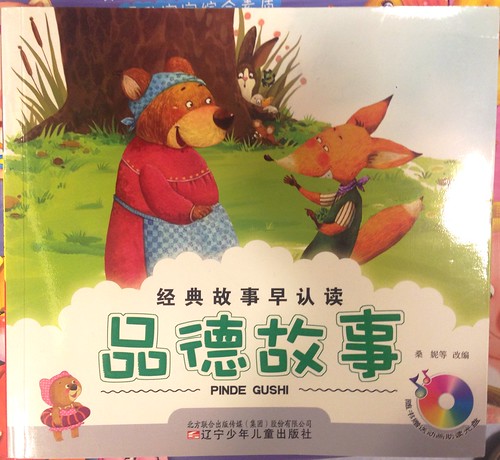 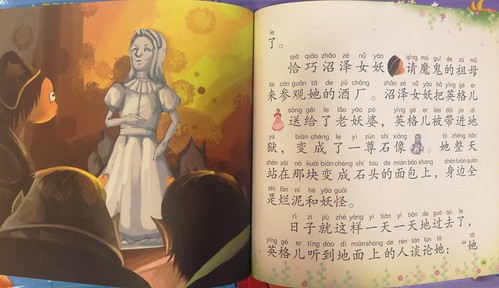 – Again, the failure to break the characters into words, and the pinyin over every character…
– The tone is a more written, formal style than most elementary learners are going to be ready for.
– Notable difficult words: 恰巧、沼泽、女妖、魔鬼、祖母、参观、酒厂、老妖婆、地狱、一尊、石像、整天、烂泥、妖怪、谈论
– The density of hard words in this book is really high, based on this page 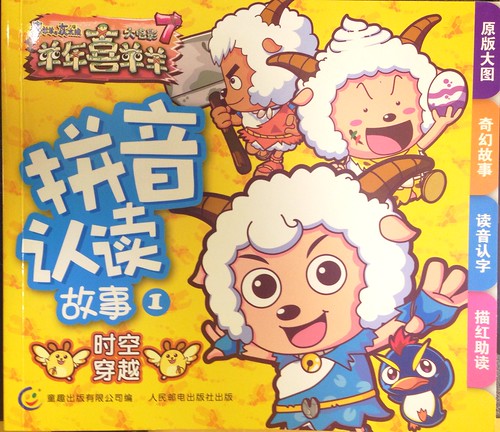 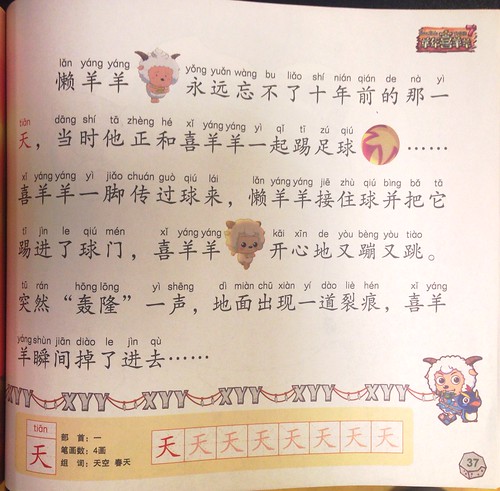 – Again, the failure to break the characters into words, and the pinyin over every character…
– The tone is less formal here, and the words used feel more oriented to kids, but a lot of the words are the type that native speaker kids could understand in the context of a story but would not use themselves; these are the words that would really trip up a lot of foreign language learners.
– You can see that on this page the character 天 is being taught, and yet there are much, much more difficult characters on this page. This highlights the fact that the book is meant to be read to the child; the child is not meant to read it.
– Notable difficult words: 懒、踢、脚、穿、接住、并、蹦、跳、突然、轰隆、一道、裂痕、瞬间、掉

I Go to Kindergarten 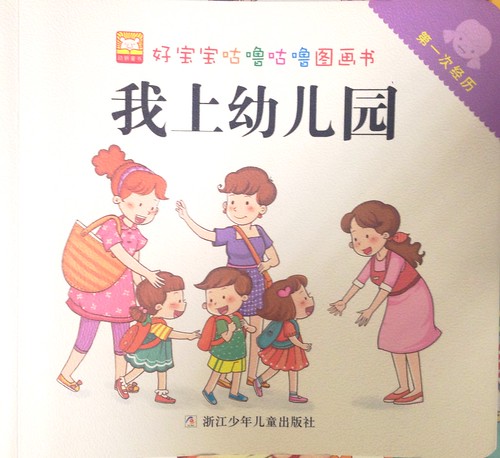 – This is my favorite of the bunch; I actually bought this book for my daughter as psychological prep before she started kindergarten.
– The characters are not too hard, but no pinyin! Finally…
– The tone is informal, and this is the kind of language that Chinese parents would expect their children to fully comprehend, in context.
– Somewhat difficult words: 嗨、全班、春游、别提、运动鞋、背着、排好队伍 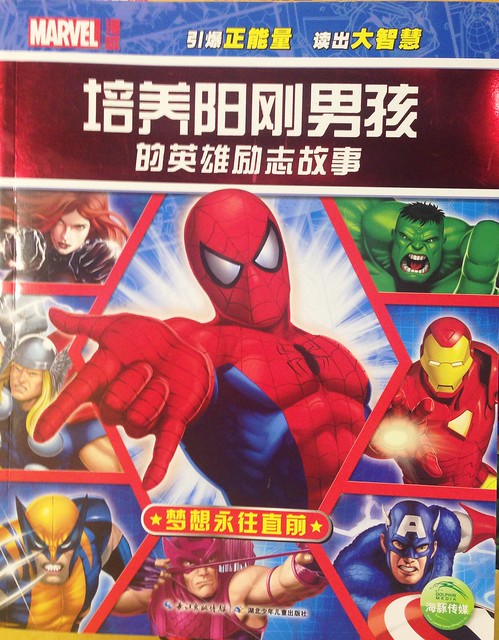 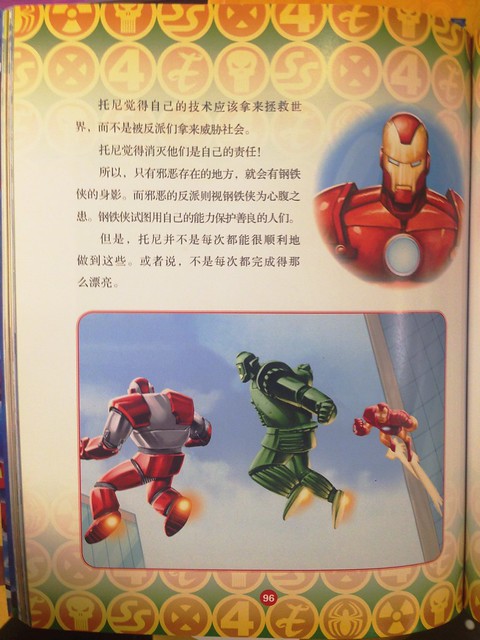 – No pinyin here, and this one is definitely higher difficulty level.
– Difficulty-wise, a high B1 (approaching upper intermediate) learner could probably tackle this, if sufficiently motivated.
– Notable difficult words: 技术、拯救、反派、威胁、社会、消灭、责任、邪恶、存在、身影、而、则、视……为……、心腹之患、试图、保护、善良、顺利、或者、完成

Most Chinese children’s books are too hard for Chinese learners. It’ll be a frustrating slog to read many books (especially those chosen at random), and all the pinyin is likely to be less helpful than you think. There are some good ones suitable for foreign learners out there, but those are the exception rather than the rule. Randomly choosing children’s books for reading practice is not recommended.

I’ve thought about this issue for quite some time already, and my conclusion is that when the average Chinese parent reads a book to her child, the goal is more education-oriented than pleasure-oriented. I know a lot of American parents that work very hard to instill a love of reading in their children, so enjoyment is extremely important. Chinese parents, however, are under a mountain of pressure to get their kids into the best schools in an environment of intense competition. Of course they hope their children like to read, but it’s kind of beside the point. The real goal is to help their children pick up characters and vocabulary as quickly as possible.

If the goal is acquiring characters and vocabulary, it makes sense that the language introduced in these Chinese children’s books is going to be more advanced than one would expect. The children are native speakers, already fluent in Mandarin, and the story provides a clear context. Therefore, why not drop a few extra difficult words and characters on every page? It’s for the kids’ own good!

There is hope for learners that really want something to read. (Little disclaimer: the following is going to be partly self-promotional, because this is one of the major problems in the Chinese learning industry that I’ve devoted my career to solving.) If there is enough interest among my readership, I’ll consider compiling a list of Chinese books by Chinese publishers suitable for learners (kind of like the kindergarten book above). For now, I’ll focus on several resources that are available to those outside of China.

Oscar & Newton Go to the Park is a print bilingual picture book by AllSet Learning, adapted from its original app form. The language is practical and informal, perfect for A2 adult learners as well as children. It’s now available on Amazon. 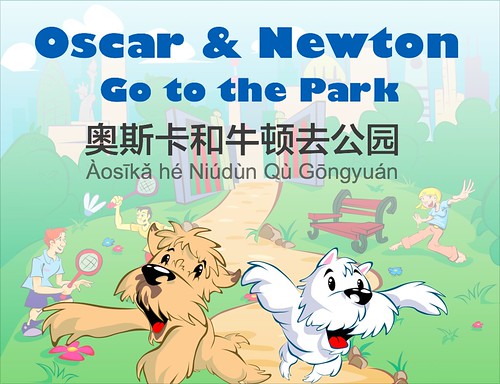 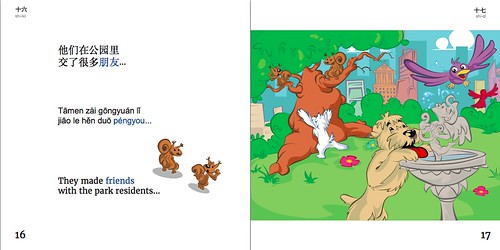 The Chairman’s Bao is a website that takes news stories and simplifies them into simpler, shorter articles. See my longer review here. This is great for intermediate learners that want to start working toward reading actual news. Includes audio. 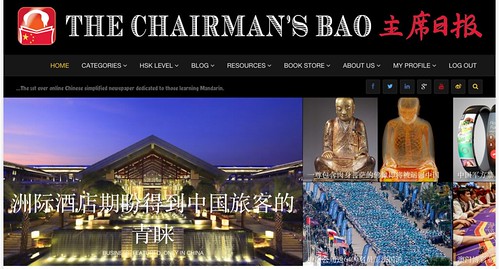 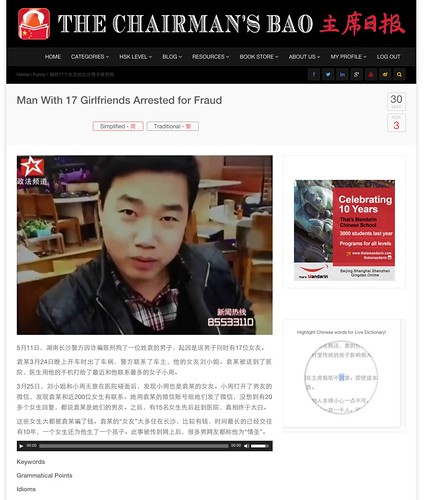 Mandarin Companion creates graded readers (short novels without pinyin or translation) meant for learners of a high elementary or low intermediate level. We’ve got five Level 1 books out, and feedback is great. Our next two Level 2 books are coming out any day now. Books are currently available on the international Amazon website, but not the Chinese one.

Chinese Breeze is the original Chinese graded reader brand. It has cheaper books and more titles out, at levels ranging from high elementary to intermediate. If you’re going for quantity, look here. Books are currently available on both the international Amazon website, and the Chinese one.