The Martian in China: Two Observations

I saw The Martian (火星救援) in Shanghai over the weekend. I had read the book, and I was looking forward to seeing the movie on the big screen. Overall, I found that it was a decent adaptation of the novel, and I enjoyed it. China seems to be enjoying it too! There were two things that caught my attention, watching with a Chinese audience, however:

I was looking forward to seeing how this line (seen in the trailer above at about 01:30) was rendered in Mandarin:

> “So, in the face of overwhelming odds, I’m left with only one option: I’m going to have to science the shit out of this.”

(The part I was most interested in was the later half, where the word “science” is used as a verb, and in a crudely amusing way.) 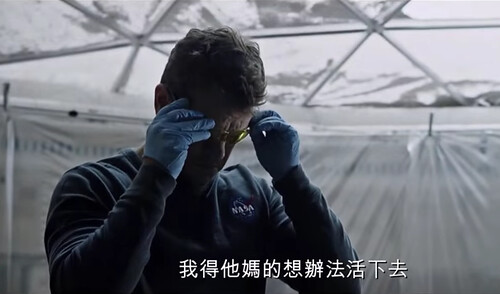 I would translate that back into English as:

> “I gotta fucking find a way to survive.”

The movie’s translation is not horrible; it captures the meaning and the tone of the original, but it seems more grim and determined than humorous, because it sacrifices the science! Oh well.

The other thing that amused me was the Chinese audience’s reaction to the way China fit into the plot. [SPOILER ALERT!] Chinese audiences aren’t dumb, and they know when they’re being pandered to by Hollywood. In this case, the Chinese Space Agency’s involvement in the rescue of Mark Watney was actually a part of the plot in the original book; it wasn’t inserted by Hollywood in a bid to ensure box office success in China.

But the way the scene was done, cutting to China out of nowhere, just felt so similar to the infamous Iron Man 3 scene (with the Chinese doctor and the Fan Bingbing nurse cameo), that as soon as the audience realized that China was about to save the day, they all laughed. They laughed! They weren’t proud or appreciative, it was just an, “oh puh-leeeze, here we go again…” reaction.

I’m pretty sure that’s not the Chinese reaction the producers were going for; hopefully Hollywood gets better at this!