The Torture of Japanese via Chinese

This week my wife and I have been planning a short family vacation to Japan. We’ll be hanging out in Fukuoka for a bit in August.

I majored in Japanese long ago, spoke pretty fluently, and was even reading Japanese literature. Now, after 18 years in China, my Japanese is rusty, but I do still speak it. Reading is much harder than it used to be, because all that Chinese in my brain wants to interpret the Japanese characters I see as Chinese. The more kana mixed in with the Japanese, the easier and more natural it is for me to read kanji as Japanese.

Anyway, what I’m finding much more difficult than reading Japanese is listening to it… in Chinese. The Chinese, of course, read Japanese kanji as if they were Chinese hanzi. In some cases, the Japanese words, pronounced as Chinese, become full-fledged loanwords in Chinese. No surprise, and no big deal. You get used to hearing Tokyo (東京) pronounced as “Dōngjīng,” and Kyoto (京都) as “Jīngdū,” etc.

But what you don’t get used to is hearing everything Japanese pronounced as Chinese. While we’re planning the trip, my wife is constantly dropping the Chinese names of all kinds of random Japanese places, and that’s something my poor brain can’t handle. On the one hand, they’re Japanese places, and I speak Japanese, so I want to know the Japanese names of the places we’re talking about. But on the other hand, my wife isn’t just going to learn Japanese for this trip, and she speaks to me mostly in Chinese, so of course she’s going to use the Chinese names. So my brain has to keep trying to jump through this series of hoops: 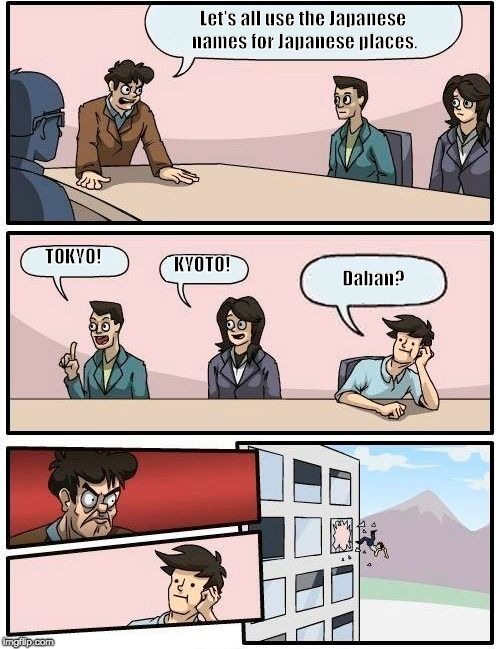