The Price of Eggs in China

Even if you’re not buying the cheapest eggs, you can typically buy eggs in Shanghai for less than 1 RMB (US$0.14) per egg.

2020-06-19 Edit: Sorry, people, my original eggs prices were off. Thanks to readers for calling it to my attention.

The real reason I took this photo, though, is as a reminder to learners that your written Chinese characters don’t have to be amazing works of beauty to get the job done.

Since I hardly write by hand these days, my own Chinese handwriting is pretty ugly too, but I don’t sweat it.

My daughter has just finished first grade in a Chinese elementary school. I’ve been absolutely blown away by how many characters she has learned in her first year (that’s a topic of an upcoming post).

Just the other day, we were having a conversation (mostly in English) about what characters we thought were “hard.” It was interesting getting her perspective, because it was totally different from mine. We didn’t agree at all on which ones were “hard.”

That’s when I brought up the (non-standard) Chinese character “biáng,” a ridiculously complex character used only to write “biángbiáng 面” (a kind of noodle). Anyway, she loved it, and after writing it a few times, can now write it from memory, and it actually looks pretty good.

Please excuse the “proud dad” nature of this post… I’m actually more blown away than straight-up proud. No one even encouraged her to learn to write this character. But here’s her writing the character from memory (bad video quality… sorry):

And here’s the finished product, after she added a bit of extra text to the top and bottom:

Note: computers cannot display this Chinese character. It’s often written in pinyin, and even when it appears on menus in China, it’s either handwritten or some weird mismatched pasted-on character.

And yes, my 7-year-old’s Chinese handwriting is already better than mine. It only took one year.

Lesson learned: a lot can be learned in one year. Adults may not typically be able to learn like children, but it’s still inspiring to see what’s possible!

P.S. And no, the syllable “biang” is not even on most pinyin charts. Obscure character, obscure syllable!

Me in 20 Years: a Chinese Kid’s Essay

I love this kid’s essay! (Most of it is fairly simple, but there are a few really hard parts. Electronic transcript and translation follow.) 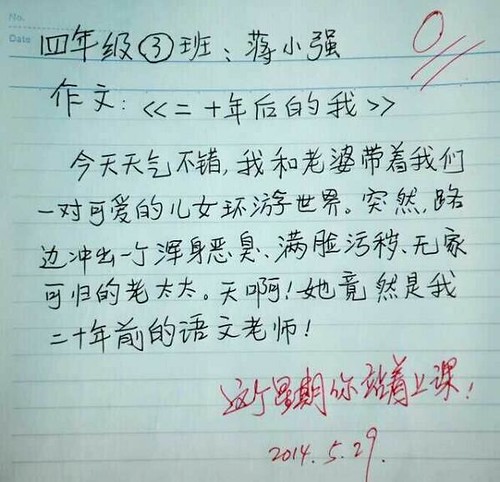 And the English translation:

> Today the weather is nice, so my wife and I take
our darling son and daughter to travel the world. Suddenly,
from the side of the road emerges a reeking, filthy-faced,
homeless old woman. My God! It’s none other than my
Chinese teacher from 20 years ago!

> This week you stand through class!

My Chinese friends are of the opinion that it’s fake and the handwriting isn’t a real third grader’s, but I was still very amused by this.

Also, if you’re trying to read this and feeling frustrated, these are the really hard parts (well beyond intermediate-level):

I mentioned before in my post “Chinese Numbers: Where 4 Meets 6” that I’d have a longer post on this topic. This is it (although not quite as long as I was hoping). Again, I don’t mean the Chinese character numbers (一、二、三、四、etc.); I’m talking about the numbers we call Arabic numerals. In China, they can occasionally be written pretty differently from what foreigners are used to, and present serious potential for confusion and misunderstandings.

This is the issue I mentioned before, and illustrated with this image:

I actually had a hard time finding really good examples of this “in the wild,” but here’s a fairly representative example: Here are some more “normal” 4s: This one is the easiest to document, and by far the least recognizable to Westerners, in my opinion. How do you even describe it? Kind of like a cross between a “P” and a “q”? Spot the 9s! This last one is interesting: You’ll notice the same hand that wrote the wacky 9 also wrote 早餐 as the non-standard 早歺 (that’s a second round simplification character). Consider this post a little heads up. If you’re suddenly in a situation in China where you have to be reading numbers, running into these forms can be a little bewildering.

Also, I’ve been trying to collect representative examples for months, and this is all I’ve come up with. (And three of them came from ChinesePod co-host Dilu. Yes, the food-related ones were all me.) If anyone could share additional examples that I’m allowed to post, please email them to me, or link to them in the comments, and I’ll add them here as an update.

Other comments are, of course, also welcome!

The style of the character “租” (meaning “rent” as in “for ~”) below really jumped out at me when I saw it in a store window: