Ziboy is a name well-known among those who frequent China blogs. It is the name of a frequently updated photoblog maintained by a twenty-something professional photographer in Beijing. I won’t say anything about the photography; the pieces speak for themselves. The photographer himself, though — Wen Ling — always seemed somewhat mysterious and inaccessible to me. I had questions. I wrote him an e-mail in Chinese and he was very friendly and open to the idea of an e-mail interview. This is the translated result.

How many photos do you take a week?

How do you organize all your images on your hard drive?

Have you ever had any formal education in photography?

No, but I have had formal fine arts education.

How do you capture the people in a natural pose without them being distracted by the camera?

Sometimes I use a 70-200 mid-range telephoto lens to shoot while keeping my distance from them.
The Nikon 995 camera I once used had its concealment advantages too. Also I just take many
photos [of one subject] successively, and there will always be one or two with good
expressions.

Do you have any plans to travel, or do you plan to continue focusing exclusively on Beijing in
your photography?

I won’t go travelling in order to take pictures, but I would really like to travel.

How did you make the transition from amateur to professional photography? Was it difficult?

Haha, so funny, this is going to give me a big head.

In regards to photographic technique and knowledge, I have learned a fair amount. You know,
when I first started I barely even knew what a roll of film was! Since my job was shooting
news on the street, it was more or less the same as before when I was shooting on the street,
so the transition from amateur to professional photographer was very natural. I also need to
be thankful for the friendly, pragmatic atmosphere of the news office. I got used to my job
really quickly.

Do you feel very constricted by digital photography and online space limitations?

I think it was digital cameras that made me feel all the joy and freedom of photography that was never
there before. Digital cameras’ shutter lag problem is a shortcoming that I really regret, as a
lot of brilliant moments are impossible to capture. I think for now using the three media of
text and images along with Flash animation for artistic expression is already relatively
technologically mature. There aren’t any problems.

What do you hope that the world outside of China gains from looking at your photography?

To understand the actual Beijing and China, and to feel that a new, better Chinese youth
already exists. 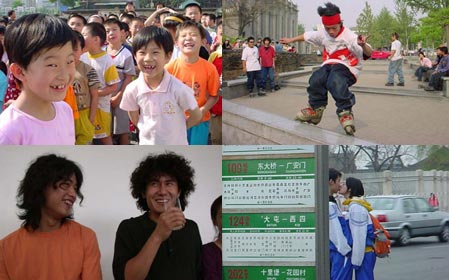 I’ve noticed three themes in your photography: police, beggars, and common working people. Are
there any particular messages you’re trying to get across with your photography?

My photos are themeless. I just hope I can be as objective as possible, fully exhibiting the
Beijing that I see. Relatively speaking, I prefer to shoot young people and don’t pay as much
attention to older people.

Has your photography ever gotten you into any trouble?

Not so far, but I’m still pretty anxious, mainly over the problem of portraiture rights. I’m
well aware that many of my photos are relatively disrespectful to the subjects, but I have no
harmful intentions.

Are there any memorable stories behind any of your photos that you’d be willing to share?

Haha, I’m always very happy to show off to my friends the group of pictures of a fight I took
on the evening of July 15, 2002. At the time I was at KFC eating dinner, and saw them fighting
through the glass of the fast food chain window. I put down my half-eaten sandwich and went
right out to take pictures, first snapping through the glass, later running right up to them to
get shots until the police arrived.

What advice do you have for aspiring photographers?

Get a digital camera and go seriously photograph what you most want to photograph until you’re
satisfied with the results.

Interview published with Wen Ling’s permission, 2003. All photos are his.