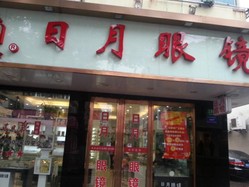 I recently noticed an eyeware shop called 日月眼镜 (literally, “Sun Moon” Eyeglasses”). This is a good example of a name that plays on common knowledge of characters and character components. The glasses themselves, of course, are unrelated to celestial bodies, but when you put the characters for sun (日) and moon (月) together, you get 明, a character which means “bright.”

Why “bright”? There are two reasons:

1. The word 明亮 (“bright”), is frequently used to describe attractive, alert, healthy young eyes. So it’s a good association.
2. Another association, although less direct, is that 明 can refer to eyesight itself. There’s a word 失明 (literally, “lose brightness”) which means “to lose one’s eyesight.” Logically, then, 明 can refer to eyesight, but there’s no word (of which I am aware) other than 失明 which uses 明 to mean “eyesight.”

Have you noticed any other Chinese shop or brand names that use “deconstructed characters” in their names?