A better title for this post would be “never trust a native speaker completely.” We all know instinctively that the mind of a native speaker is an essential resource for learning a language. Put enough of these native speakers together, and you can create the immersion experience which all learners crave in order to truly level up their fluency. But as for an isolated, individual native speaker… there are a few issues to keep in mind.

Below I’ve summed up the three big reasons why you can’t trust native speakers (completely), and then rounded it off with some advice:

Put simply, most native speakers don’t know their language inside and out. Sure, they can speak their native language, and maybe even write it well. But when you start asking them more “meta” questions, many native speakers will struggle to give a straightforward or meaningful answer.

The kinds of things native speakers often struggle with when queried on their native tongues:

– Why is this wrong?
– What is the difference between these two words?
– How do you express this obscure idiomatic phrase from my language in your native tongue?

A lot of times, the native speaker honestly wants to help, but they’re just not equipped to do so. Being masters at their own native tongue does not make them qualified to answer your metalinguistic questions. They may even refuse to answer your crazy learner questions (and in some cases, they may be well justified, since we learners tend to over-analyze at times).

So while it sounds strange to call a native speaker ignorant of his own language, when it comes to the “meta,” most native speakers are.

So to address the types of questions mentioned above:

– Native speakers don’t normally have to identify why something in their language is wrong. If something they say ever comes out wrong, they can fix it, based on their intuition. But they don’t ever have to say why they had to fix it. “It sounded weird” is the furthest they ever need to go down that line of thinking. (You don’t actually need to know why either, just as babies don’t need to know why. But sometimes you really want to know, and it can save time.)
– Native speakers know how to use similar words differently, but it’s not likely to be conscious. Or the differences they are conscious of (like “they’re, their, and there” in English) seem painfully obvious to even half-way diligent non-native speakers. (Having these types of questions answered well can often save you a lot of time spent on trial and error learning.)
– If the phrase from your language is obscure but this person has learned it, it’s possible that they learned it specifically because it was hard to translate. There’s a big chance they’ll fall back on a stock explanation for this that eclipses the myriad of untranslatable nuance. (This kind of question is typically not something you really need answered anyway, though.)

When it comes to the problem of ignorance, this is where language teachers have a huge leg up on the average joe. Especially experienced language teachers will have addressed the “why is this wrong” and “what’s the difference between these two words” many times, and will have gotten good at them. They might even be so good that they can give simple answers that enable you to grasp the essence and move on, instead of needlessly delving into endless minutiae.

[See also: Olle’s take on this at Hacking Chinese.]

OK, some some native speakers do have some meaningful metalinguistic insight into their own language. They might be language teachers, or translators, or just people that like to reflect on the peculiarities of their native tongue. These people are super helpful, and likely even enjoy answering your questions, so they’re great to have around.

The problem can occur when these people get a little cocky and start trying to make sweeping claims about their native tongue. They’re like the over-eager cop outside his jurisdiction. Allow me to illustrate with a little story from my own English-teaching past. (Oh yes… I was the cocky bastard in this story.) 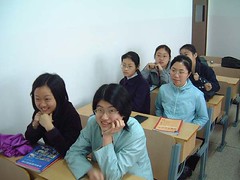 Learning English from a cocky teacher

When I first started teaching Chinese English majors, I noticed they were really bad at informal spoken English. One particularly glaring example was that the only greetings that they could handle were “hello” and “how are you?” I quickly banned those two, forced them to start using “hi” and “hey,” and taught them these greetings:

I meant well (and those students seriously needed to learn some new informal greetings), but I presumed to speak as the authority on the entire English language (at the ripe old age of 24, no less), as an American, without even having substantial contact with non-American English. And that was just overstepping my bounds. I was cocky.

It’s surprisingly easy to do this as a teacher, though, even if you’re pretty sure you’re not cocky at all. There will always be weird exceptions and unfamiliar dialects, as well as new expressions coming into vogue. Teachers do their best, I know, but it can be difficult to play the role of “language authority” without buying into the vastness of one’s own “enlightened native speaker” knowledge at least a little.

In Linguistics 101 in college I was intrigued by the the concept of the ideolect, the idea that no single person uses the entirety of a given language, and no person uses the language they do use in exactly the same way. The entirety of a language exists as the sum of all speakers’ ideolects. It is inherently distributed (across the minds of speakers), and can never be fully centralized (except maybe by SkyNet some day?). This pretty much blew my mind.

And so linguists and language teachers will make efforts to see beyond their own ideolects, and to see the fuller picture of the language they are trying to understand. But the human brain can only hold so much, and there’s only so much time. A language is a big thing.

I hope I’ve convinced you that native speakers are fallible, and they cannot help but be so, when it comes to perfectly representing The Ultimate Truth about their mother tongues. But each has the most insight of anyone into his own ideolect.

If it’s an important or tricky question, always get a second opinion. Better yet, if you’re an advanced learner, present conflicting evidence collected from multiple native speakers to those native speakers. This can produce fascinating insight for learners, and often for the native speakers themselves.

When I went through this process myself, years ago, I expected to find the “perfect name” that everyone agreed was awesome and perfect for me. That didn’t happen. I still remember quite clearly the dissenting opinions on the name I eventually chose (which got mostly positive feedback):

(I chose it anyway, because enough people thought it was a decent name, and I liked it.)

Whether you’re a learner or a metalinguistic advisor on your own native tongue, though, my advice is the same: Stay humble. Stay curious. And talk to lots of native speakers.