I recently published a guest post by Scott Young, who just spent about three months in China, attempting to stay immersed in Chinese the whole time (even while traveling with his non-Chinese friend, Vat). I didn’t comment on my own interactions with Scott, though, or my thoughts on his experiment. So I’ll do that now.

Here’s a video we took in the (then) empty office next to the AllSet Learning office. We were plagued by technical problems, but Vat’s persistence got us through.

I was expecting that Scott would be taking a break from his “immersion” while talking to me and talk to me in English. We had exchanged emails before we met in person, and it was all in English. But no, from the get-go, Scott spoke nothing but Chinese to me. (And Vat too.) So we talked for quite a while (before and after the video), and it was all entirely in Chinese.

I part of me finds this weird. I suppose it’s because it violates the “efficiency” principle I talk about in my language power struggle post. We both knew that we could communicate absolutely effortlessly in English.

But he was a man on a mission, with a “no English” rule, and I totally respected that. In fact, It’s becoming less and less weird for me to think of Chinese as an international language. Chinese is the language of our office, and I speak to our (non-Chinese) interns mostly in Chinese as well (as long as they’re not absolute beginners).

On Studying before You Arrive 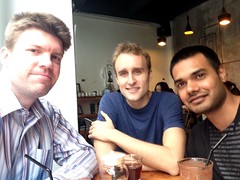 Scott mentions that he had studied Chinese for 105 hours before coming to China. Vat didn’t. I’m sure there are other factors at play, but there was a noticeable difference between Scott’s and Vat’s Chinese levels. I think Scott was also putting more time into Chinese in China (Vat also had video and architecture-related interests to pursue). But the head start undoubtedly helped Scott a lot.

This is a common thread I’ve seen in a lot of success stories, though: for China, in particular, prior study seems to help immensely. I’ve heard and discussed with friends theories about having to deal with the “triple threat” of (1) unfamiliar language, (2) tones, and (3) Chinese characters leading to higher levels of frustration when tackling Chinese. In fact, it’s a good reason to delay studying characters a bit, if it means less frustration and a stronger foundation in pinyin and pronunciation.

I had three semesters of Chinese before setting foot in China. I sure struggled when I got here, but I was essentially focusing entirely on listening and pronunciation for the first couple of months. I knew pinyin, had the grammar basics down, and knew all the characters I needed for a while. I know that focus helped me tremendously.

> What matters is that you are not speaking English to prevent: (1) Forming friendships with people who can’t or won’t speak Chinese….

This is key, but it seems quite harsh. Can you imagine bumping into Scott while traveling around China, trying to strike up a friendly conversation with him about areas in Yunnan he’d recommend visiting, and being totally blown off by him in Chinese? Would you be heartless enough to similarly rebuff a friendly fellow traveller? This is exactly what Scott is advocating, though: “prevent[ing] forming friendships with people who can’t or won’t speak Chinese.”

I know that Scott is right, though. I also know people that have followed less extreme versions of this policy in order to make the most of their time in China, although those people tended to have more than just three months, so a few conversations here and there weren’t a huge deal. And then there’s the “expat bubble” crowd, of course. Most of those people didn’t intentionally form the bubble; it just “kind of happened.”

When I first started teaching at my first job in China at Zhejiang University City College (ZUCC), my only co-workers were four Australians. I fully expected those guys would be my new friends, and I was excited to finally get to know some Aussies. But they cruelly brushed me off; they were a tight-knit group, and not at all interested in letting me in. So I was on my own, lonely, and motivated to learn Chinese. I hung out with my Chinese roommate a lot. I studied. I went out and practiced with random people. I made more Chinese friends. I learned Chinese. I was kind of lucky, really.

This is one of those personality things, though. I’d be curious to hear from readers who have tried this, whether successful or not, and what the results were.