Chinese Teachers: Use Your Chinese Names!

Chinese teachers, please have your students call you by a Chinese name. You’re not helping them by calling yourself some easier-to-pronounce English name. I would have thought that this was obvious, but after all these years in the business, I can now see that it is not obvious to many otherwise well-meaning teachers. So I’ll spell it out here. (Please forward this to your Chinese teacher who doesn’t ask you to use a Chinese name in your interactions.)

So why should students of Chinese call their Chinese teachers of Chinese by a Chinese name? I’m glad you asked…

Using your actual Chinese name shows respect for the culture

My dad is one of those people that enjoys befriending recent immigrants in the United States. He likes to find out where they’re from, why they came to the U.S., etc. One of the things he always asks “Bob from Iran” or “Alice from China” or whoever is, “what’s your real name?” He does this not only out of curiosity, but also to show a genuine respect for their culture and interest in their identity. Most of the time immigrants are thankful for this gesture (even if he can’t always accurately reproduce the sounds that make up their names).

As a teacher, you get to decide how your students address you. But in Chinese culture, it’s a non-question; teachers are simply called “[Surname] Laoshi” by their students. As a teacher of Chinese, why would you not use this opportunity to start teaching your students about Chinese culture in an easy, practical way? Get the cultural respect going from lesson one. Students will be totally on board.

One of the main arguments for NOT using real Chinese names is that “my Chinese surname is too hard for foreigners.” OK, maybe your surname is hard for most foreigners, but your students have decided to learn Chinese. They probably already know it’s not easy. Even if your surname is particularly difficult to pronounce, it’s probably only one syllable. And it’s one syllable your students are going to be able to repeat over and over every lesson, and they’re eventually going to start getting it right.

So don’t baby them. Let them struggle a little bit. It doesn’t matter if your surname is “Xu” or “Zhu” or “Jiang” or “Zhang” or “Yu.” They’ll get it eventually. 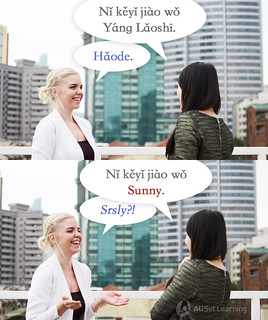 It’s a vote of confidence

So it’s a pretty safe bet that your students will not be pronouncing “Xu” correctly on day 1, and that’s OK. But when you tell them, “You don’t need to try to say ‘Xu.’ Just call me Vivian,” you’re casting a vote of no-confidence in their ability to learn correct pronunciation. That’s a terrible thing for a teacher to do.

Cast a vote of confidence in your students by telling them, “my name is a little tricky to pronounce, but don’t worry; you’ll get it eventually. Just keep trying.”

Have confidence in them from the first lesson, and they will keep trying. They need you to believe that they can learn to correctly pronounce your name.

Chinese names are hard to remember

This is totally true. Chinese names are hard for foreigners to remember. But you know what doesn’t help? Enabling learners to never even try to remember, and always copping out by using English names. That’s just lazy.

Chinese names are hard to remember in the beginning. But learners get better at it by learning more real Chinese names, and the process starts with you, the Chinese teacher. With each new Chinese person the learner meets, he learns a real Chinese name, and one by one, the names start to seem less insane. They become manageable.

Start your students down this road.

But what about Hong Kong?

One thing I’ve heard over the years is, “but in Hong Kong, Chinese people often use English names. It’s also a Chinese thing.” OK, yes, that’s true. But as a learner, I really don’t need help learning names like “Jacky” and “Coco.” What I need is more practice with the less familiar names… the ones starting with “Zhang” and “Wang” and “Hu.”

So Hong Kong-style English names are easy freebies that we sometimes get, but they’re certainly not the norm for everyone in mainland China, and they’re not an excuse to avoid Chinese names altogether.

Lastly, let me leave you a counter-example. Imagine a blond-haired blue-eyed foreigner living in China and working as an English teacher. We’ll call him “Carl.” He teaches English, but he also knows Chinese, and uses it a little bit with beginners.

But here’s the thing: Carl has chosen “Zhang” (张) as his Chinese surname, and in his English classes he has all of his students call him Zhang Laoshi (张老师). It’s because “Carl” is hard to pronounce, and he just finds it easier.

Is that not absurd? Would the Chinese students not find this odd? Does it help the students to call Carl “Zhang Laoshi” in English class?

Chinese teachers, please have your students call you by a Chinese name. They’ll thank you later.