Let’s face it, learning the tones of Mandarin Chinese is a challenging endeavor, and the stereotypical “mā má mǎ mà” example isn’t super helpful. Of all the alternate systems to help learners develop a feeling for the tones, my favorite is the “dude system,” originally developed by Kaiser Kuo for The Beijinger. He recently reposted it in Quora, and I’ve gotten his permission to share it here (with a little audio addition of my own): 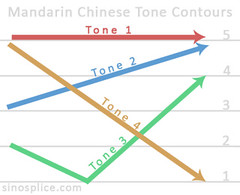 1. First Tone: Dūde, the disapproving tone, as to the clumsy roommate who’s just knocked over your three-foot Graphix and gotten bong water all over your Poli Sci 142 reader: “Dude, I can’t believe you spilled my bong again!”

2. Second Tone: Dúde?, in the concerned but creeped-out way you might address the roommate you discover sitting naked and cross-legged in the dark, chanting “Nam-myoho-renge-kyo” and sounding a little brass bell.

3. Third Tone: Duǔde, scornfully, as if your roommate has asked to borrow 50 dollars so his sensei can align his chakras: “Yeah right, dude.”

4. Fourth Tone: Dùde!, as if you are exclaiming in triumph to your roommate when coming home from class having gotten a date with mega-babe Elena from your macroeconomics class.

In case you don’t get it and need to hear it, here’s an MP3 I made: dude1234.mp3. (It adheres more to Kaiser’s descriptions above than to the exact Chinese pronunciation.)