Breaking Bad was an awesome drama. Better Call Saul is looking like it’s shaping up to be another great story. But if you’re not already familiar with both series, it’s far from obvious that the two are connected based on their titles alone. Not so with Chinese!

The Chinese titles of the two series are: 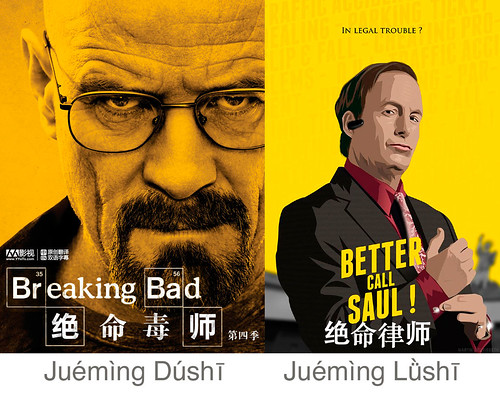 And in plain text:

The two differ by exactly one character!

绝命 (not a common word at all) according to my dictionary means “to kill oneself” (but here, while not entirely clear, must mean something like “at the end of one’s rope”), and 毒师 (also not at all a common word) would be something like “drug master” (which you could translate as “drug lord,” but “drug lord” is more commonly expressed in Mandarin as 毒枭). The word 毒师 was likely chosen because it’s similar to 老师, and Walter White begins the series as a chemistry teacher. Meanwhile, 律师 is actually a common word meaning “lawyer,” however. It seems to be just a fortuitous coincidence that the new series name can play off the old series name so neatly.

Now, you could definitely argue that neither is a good translation of the original English series title, but both “Breaking Bad” and “Better Caul Saul” would be extremely hard to translate well into Chinese. It does seem that keeping consistency of translation to link the two is a nice little added benefit when you can’t very faithfully translate the original titles anyway.