Following my trend of writing a series of posts years apart (I’m referring mainly to how I learned Chinese), I thought I’d write an update to my varicose vein (静脉曲张) situation. This isn’t something that all of my readers are going to want to read, but I know from my own googling that there aren’t enough personal accounts of this kind of thing online (a foreigner in Shanghai going through specific medical procedures, with details), so I figured it would be helpful to add my own.

I’ll spare you all the photos; if you really want to know what bad varicose veins look like (and you probably don’t), you can google them. My situation was not as bad as you’ll see in a lot of the pictures online (more similar to the image on the varicose vein Wikipedia page), but they were unsightly and noticeable on my right leg, with the largest twisted lumps of veins concentrated on both sides of my right knee, toward the back.

It was super useful for me to read my own first blog post about my varicose veins on this blog, written way back in 2004, because I had forgotten most of those details. It’s also surprising that it’s been 11 years since I wrote that post! The varicose veins in my right leg did worsen over that time period, but very slowly.

Anyway, here’s a quick rundown of what happened and how it turned out:

– On Oct. 27 when I got out of bed in the morning, I felt pain surging into the bulging veins around my knee as I stood up. Not good, but not too painful, and it got better after I walked around a bit. No big deal?
– I discovered that the pain would return every time I was lying down or sitting for a while, and then stood up. It started getting worse and worse (we always hope these things will just “get better on their own,” right??), and then by Oct. 29 the area on the right side of my knee started to get pink and inflamed. Time to act!
– On the evening of Oct. 29 my wife used an app called 好大夫在线 to send a picture of the situation and arrange a call with a doctor. In true Chinese doctor style, he brought up the scariest possible situation: a blood clot (血栓) had developed inside the varicose veins (thrombosis), and if I was really unlucky, it could dislodge and wind up in my lungs, quite possibly killing me. So stay in bed, don’t walk at all unnecessarily, and get to the hospital ASAP.
– He tried to get us to go to his own hospital in the morning (surprise, surprise), but my wife did a little research and discovered that Tongren Hospital on Xianxia Road (同仁医院、仙霞路) is known for specially treating this kind of issue, and it’s a lot closer to our home. It’s not an international hospital, but it had a good reputation in Shanghai. So that’s where we went in the morning.
– After taking a look, the doctor determined: I had developed a blood clot in the varicose veins of my right leg, so I needed to be admitted to the hospital immediately (and stay off my feet almost entirely), treat the blood clot, then immediately have surgery to have the varicose veins removed.
– I was admitted Friday (Oct. 29). One of the first things they did was use ultrasound to check my deep veins (same as last time, in 2004). There was no deep vein thrombosis; that meant the surgery could proceed.
– The surgery was later scheduled for Tuesday (Nov. 3). In the meantime, I was getting three IV drips a day, which thinned my blood a little and took care of the thrombosis near my knee. By the time surgery day came around, my leg was no longer swollen and already feeling a lot better.
– Prep for the surgery included shaving my entire right leg, then injecting some stuff into the veins, then looking at them through some special machine that allowed the doctors to see exactly where the veins were under my skin, and determine which ones needed to come out in the surgery. (Sorry, this is one of the areas that I never researched to figure out exactly what medical technology was used. Seemed legit though!) The doctor used a sharpie to map out the “bad veins” directly on my skin.
– Although in China it was pretty normal for this kind of surgery to only anesthetize the lower half of the body, the anesthesiologist decided to totally knock me out, because that’s how it’s normally done overseas, and I was, after all, a foreigner. That was probably also a bit more expensive, but I was OK with it. Then I was wheeled into surgery room, which looked modern and clean. As the doctors got ready, I was knocked out with some kind of gas.
– Next thing I knew, I was half-conscious on a stretcher, throwing up a little. Surgery was over, but my stomach was upset by the anesthesia. I fell back asleep, and woke up again later, all cleaned up.
– The surgery had taken about 2 hours, despite initial estimates of 1 hour. My veins were really a mess, apparently. Altogether there were 10 relatively small incisions made in my right leg, the highest at the top of my leg, near my groin, and the lowest near my ankle. Most cuts were around my knee and calf. It was through these incisions that the bad veins were cut off from the “trunk,” cut into smaller lengths, and removed from my leg. Each incision got one stitch. My leg was wrapped in a big bandage afterward.
– My leg was a little sore the first day after the surgery, and also quite bruised. Veins had literally been removed, after all. I could not shower while those stitches were in, and the first day I couldn’t even leave my hospital bed at all. There was the option of using a catheter, but I vehemently insisted I was great at peeing into a bottle while lying in bed. (It turned out I was both a good liar and a quick learner.)
– 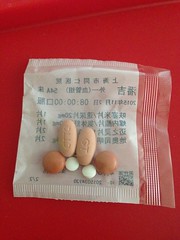 I ended up leaving the hospital the following Friday (Nov. 6), my hospital stay stretching for almost exactly one entire week. I was prescribed some medication, which was mainly Chinese medicine stuff that was simply good for circulation. It also included aspirin.
– I returned a week later, on Friday the 13th, to have the full-leg bandage taken off for good and all the stitches removed. I could finally shower like a normal person again, but I was instructed to wear a tight elastic sock on my right leg for two years.
– The costs, including the week-long hospital stay, medicine, and surgery, added up to a little less than 20,000 RMB, just as predicted in 2004. My doctor told me I should be glad I had the surgery done in China, as it is a lot cheaper here.

For me, the weirdest thing about the whole ordeal is that I don’t actually need all those veins that were removed. You’d think your body needs all its veins, right? Apparently this is a pretty standard procedure for bad varicose veins. It’s rare that it needs to be done on someone as young as me (I’m 37), but, on the plus side, it means that my recovery was faster.

Hopefully that’s the end. (Please, no one beg me for more varicose vein stories.)