How I Learned Chinese (part 4)

It seems to have become a tradition of mine to drag this series out over years and years, but this part should be the last one I need to write for quite some time. Just a quick sum up:

This post is more of a look at how I learned, rather than specifically what I did. I’d also like to look more closely at the relationship between study and practice. This balance is essential to any learner’s long-term progress, but there’s no one-size-fits-all solution.

First, a quick timeline of my experiences:

The Role of Study

Especially in the beginning, you need a helping hand to learn Chinese. It’s very hard to start “practicing” without some kind of structured study. Many learners turn to schools for this, and tutors are another option (both have pros and cons), but it’s hard to argue that some kind of formal study is not helpful for most people.

The key is that study alone will rarely lead to real fluency. At some point (preferably in the elementary stages), you need to be given ample opportunities to speak Chinese in a natural way. Hopefully this is motivating and fun, and not something scary. If the end goal is spoken fluency, you have to start practicing speaking. Exorcise those demons of bad Chinese!

Study itself has many forms, however, and I’ve found that many learners appreciate school lessons in the early stages, whereas 1-on-1 tutoring becomes much more useful once there’s a good foundation, and concrete goals for how Chinese can be applied start to take shape. So for me, the “schooling” was OK as my first three semesters’ foundation and then as HSK prep. Tutoring helped me fix the very specific pronunciation problems I was still having when I first arrived in China (I really needed individualized attention for that). Later, again, tutoring made the most sense once I had the concrete goal of getting into grad school and needed help learning some specific material. (I also had to spend a lot of time managing my tutor, though… There was no AllSet Learning back then!)

I remember very clearly, sitting in my Chinese syntax class in grad school, listening to the professor detail some finer points on the relationships between certain Chinese prepositions and verbs, and thinking, “these are the ultimate advanced Chinese lessons. The meta-lessons that even native speakers are clueless on.” So there was always a strong aspect of “study” within the “practice” of grad school in Chinese. Once I started working, though, “practice” really became the main focus, and “study” was relegated to an ongoing “as needed” self-directed activity.

The Role of Practice

My real “practice” started when I arrived in China. It was the reality check I needed, but also a source of motivation. To quote part 2:

OK, so I already knew when I arrived that my pronunciation wasn’t great. I knew I got tones wrong sometimes. I knew I had been fudging Mandarin’s “x” and “q” consonants for two years. But I wasn’t prepared for the end result: people frequently just plain didn’t understand me. At all.

At first I tried to downplay it with “that guy was just not used to talking to foreigners” or “it must be my Beijing-centric pronunciation.” That attitude didn’t really help me. I got through the denial stage pretty quickly and ended up with a firm conviction: the problem is me. I then gathered all my resolve and launched into a relentless campaign of self-criticism.

That was kind of rough. It would have been nice if I had been prepared for actual communication in Chinese in progressive stages. I got through the initial shock, though.

The early years of practice in China were both the hardest and the most fun. They were the hardest for me because I had to force myself to talk to strangers regularly, and often my non-comprehension made those conversations quite awkward. Oh yes, I dealt with a lot of awkwardness. But my psyche was protected, in part, by this weird “I can’t believe I’m in China talking to people in Chinese” euphoria that imparted a certain delusion of unreality. And so in many ways, it all felt like a weird, fun dream.

The “delusion of unreality” slowly wears off as you get to the Intermediate stage, however. Most things Chinese people say in Chinese are no longer “funny” or “crazy” because you’re used to Chinese culture, and you’re used to the way people speak. To give a simple example, you stop thinking, “it’s so weird that Chinese people are always asking me if I’ve eaten” every time and you start thinking of it as a normal greeting. You stop “hearing Chinese” and you start just listening to people. And just talking back.

It’s at this point that the practical application type of “practice” becomes really important. For me, it was my initial training job in Shanghai first. Then it was the work of my Chinese language masters program: following the lectures, completing the readings, writing papers, etc. Then it was directing ChinesePod lesson development. And then it was my work at AllSet Learning (and later Mandarin Companion). 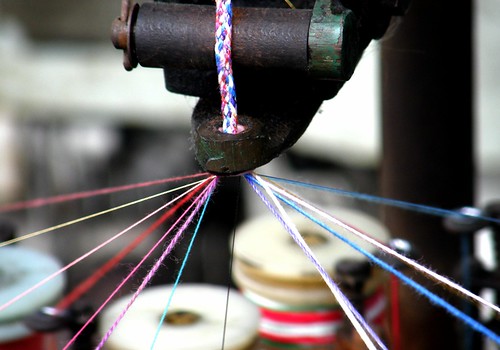 It’s all about a Mix

Hopefully you never have a total lack of practice in the beginning (even if it’s just with a teacher), but practice should really ramp up over time until it’s just “application” (using Chinese for normal communication or work or whatever). Similarly, your “study” looms large in the beginning, but should never go away completely (even advanced learners pick up new vocabulary all the time), as it shrinks down in overall prominence.

It’s not that I concocted this; it’s not a method. It’s a very natural process, and I’m merely reflecting on how these principles played out in my own experience. Through my work at AllSet Learning, I often help frustrated learners, and a study/practice imbalance is one of the major sources of frustration. Some learners have unrealistic expectations about how far traditional “study” can take them, fluency-wise. Others have been immersed in “practice” for far too long and are not even sure how to go about addressing the gaps caused by years of neglecting “study.” I admit that it’s partly just luck, but somehow I managed to strike the right balance over the years.

I can’t say I learned Chinese the fastest or to some mind-blowing level, but I achieved my goals and have the skills to apply it in my career. I’ll never stop studying Chinese (“活到老学到老,” as the Chinese say), but especially due to the strong “practice” components of the past 10 years, I do feel confident in saying “I’ve learned Chinese.” (Just not all of it!)