This is a clothing store in Shanghai’s Jing’an Metro Station: 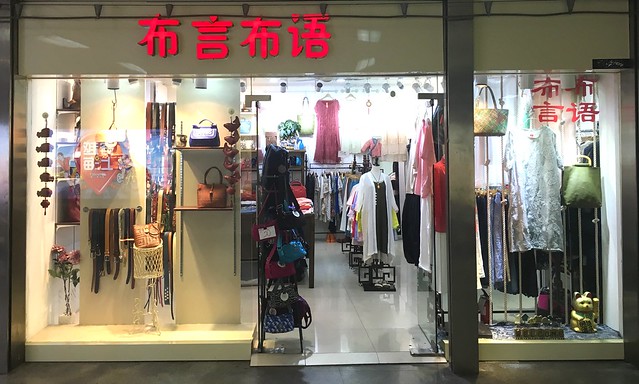 The name of the shop is 布言布语 (Bù Yán Bù Yǔ). The pun involves the character 布, which in this case, is a substitute for 不.

The original expression is: 不言不语, which means “to not say a single word.”

The pun gives us 布言布语 (the pronunciation matches exactly), riffing on words like 布料 (“cloth”) which use the 布 character.

Truth be told, 布言布语 is not a vey clever name. Sure, it has the pun, but 不言不语 has nothing to do with clothing. Still, somebody thought it was good enough for a clothing shop name.

Other Chinese brands have similarly used a language theme in their names. The first one that comes to mind for me is “BreadTalk,” which is 面包新语 in Chinese.