XU! (you can be high and quiet) 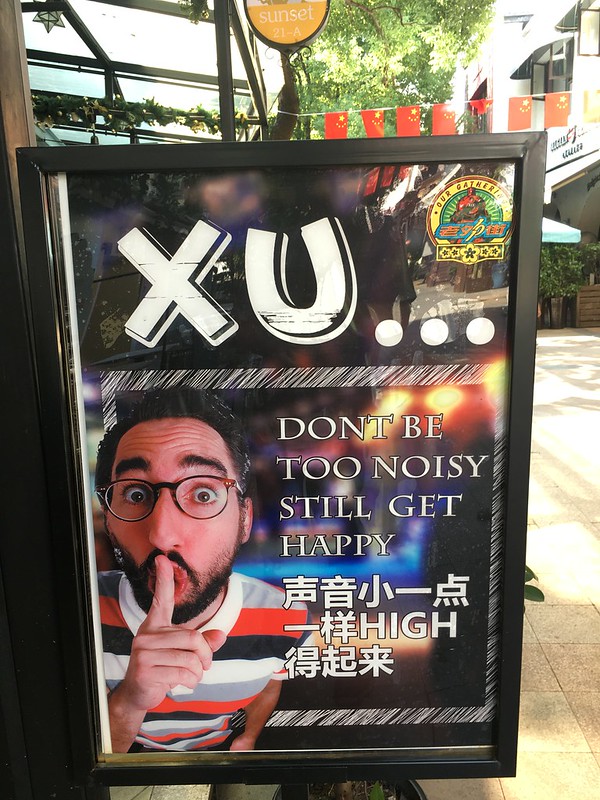 First of all, “xu” in pinyin is how you spell the word for “SHHH” (the “shushing” sound) in Chinese. It even has a character: 嘘.

Second, the translation “don’t be too noisy still get happy” is understandable, I guess, but let’s look at the original Chinese:

So 声音小一点 refers to one’s voice being a little quieter. The “if” part and the “you” subject are implied.

The 一样 means “the same,” but here it’s more naturally translated as “equally” or “just as.”

The “HIGH” in Chinese is not (usually) some kind of drug-induced state, but rather the “natural high” of just getting all excited and having a blast. There could be some drinking involved (think karaoke), but the emphasis is on the fun had.

The interesting thing here is that the word “HIGH” in Chinese is translated as “happy” in the English version. In fact, a co-worker of mine told me that she used to assume that the Chinese word “high” (sometimes written as “嗨“) was derived from the English word “happy” (a direct translation of 开心), rather than the English word “high.” (Who knows!)

I’d use this translation:

Being a little quieter,
you can still have
just as much fun.

Nov. 13, 2017 Update: a friend wanted more explanation of the complement thing, so here it is, copied over from Facebook comments:

Answer: In that example, 起 is a verb, and 来 is the direction complement. You insert 得 between the two to make it into a potential complement, adding the meaning of “can.” 起得来 = can get up.

The same is true for HIGH, only the complement is 起来 (in this case, 起 is not the verb). So that’s how you get HIGH得起来. (This one is harder to translate literally, though… “can get high” would be literal, but misleading (no drugs!).) “Can have a blast” is closer to the meaning, but you lose more of the V+起来 literal translation. “Can get happy” maybe, if you don’t mind a little Chinglish!)

In the blog entry, I linked to one grammar point on uses of 起来, and another on potential complements. It’s the combination of the two that you need to understand to fully get this. It’s a little tricky!