I’ve been using QQ Music for years already. It’s one tenth of the cost of Spotify, and it has almost all of the songs I want to listen to (plus no VPN required!). It has English lyrics for most of its songs, and sometimes even Chinese translations of those English lyrics.

I’m quite the reader of song lyrics, and sometimes QQ Music lets me down in weird ways. The first way is just bad translation. Song lyrics are a translation challenge no matter what, and I’m forgiving, but sometimes the translations into Chinese are just plain bad.

Do you remember that emo band called The Used? Here’s a YouTube video to refresh your memory:

Anyway, what do you think this band’s Chinese name is? Translated literally, it would be something ridiculous like 被利用着. Nope. This is it:

习惯乐队. 习惯 as in “customs” or “habits,” and 乐队 as in “band.” The word 习惯 also means “to get used to” (doing something), so some translator got the words right, but badly misunderstood the meaning of the band’s name. I guess he was thinking the band’s name meant something like “Getting Used to It”?? No idea.

This kind of translation mistake is fairly common on QQ Music, but not common enough that it bothers me too much.

Perplexing Use of the N-Word

This next mistake, concerning Steven Cooper’s song “Born to Do,” really had me confused, though:

I randomly came across this song on QQ Music, and my kids liked it. I did a quick lyrics scan, and didn’t notice any bad words, so we listened to it. It wasn’t until after listening to this song several times that I read the lyrics carefully and discovered the N-word.

I was pretty shocked, because this is a Christian rapper. WHY did he feel the need to use that word (just once) in this song?? It didn’t make any sense.

The more I thought about it, though, the more I realized that the lyric itself didn’t make any sense, and not just because of a bad transcription:

Wait, what? Who’s bleeding and why? It’s a song about how hard he tries to improve his skills at rapping because it’s what he was “born to do.” This particular part of the song is about writing.

So yes, the “n-word” here should have been “knuckles.”

How could such an offensive mistake happen? I’m sure a Christian rapper with clean lyrics takes care not to drop gratuitous N-bombs in his song lyrics.

The best I can guess is that the lyrics are transcribed by machine, not be a person. It’s kind of weird that a computer would identify the N-word. I mean, you can’t have it popping up randomly in Celine Dion songs or Disney lyrics, right? But maybe if a song is classified as rap, then the “ban use of the N-word” toggle is switched off.

Here’s how that section should have gone:

There’s one final strange thing happening here, though… Although the English lyrics contain the N-word, the Chinese lyrics contain a translation of the word for “knuckles”: 指关节.

…and now I am totally at a loss to explain this! 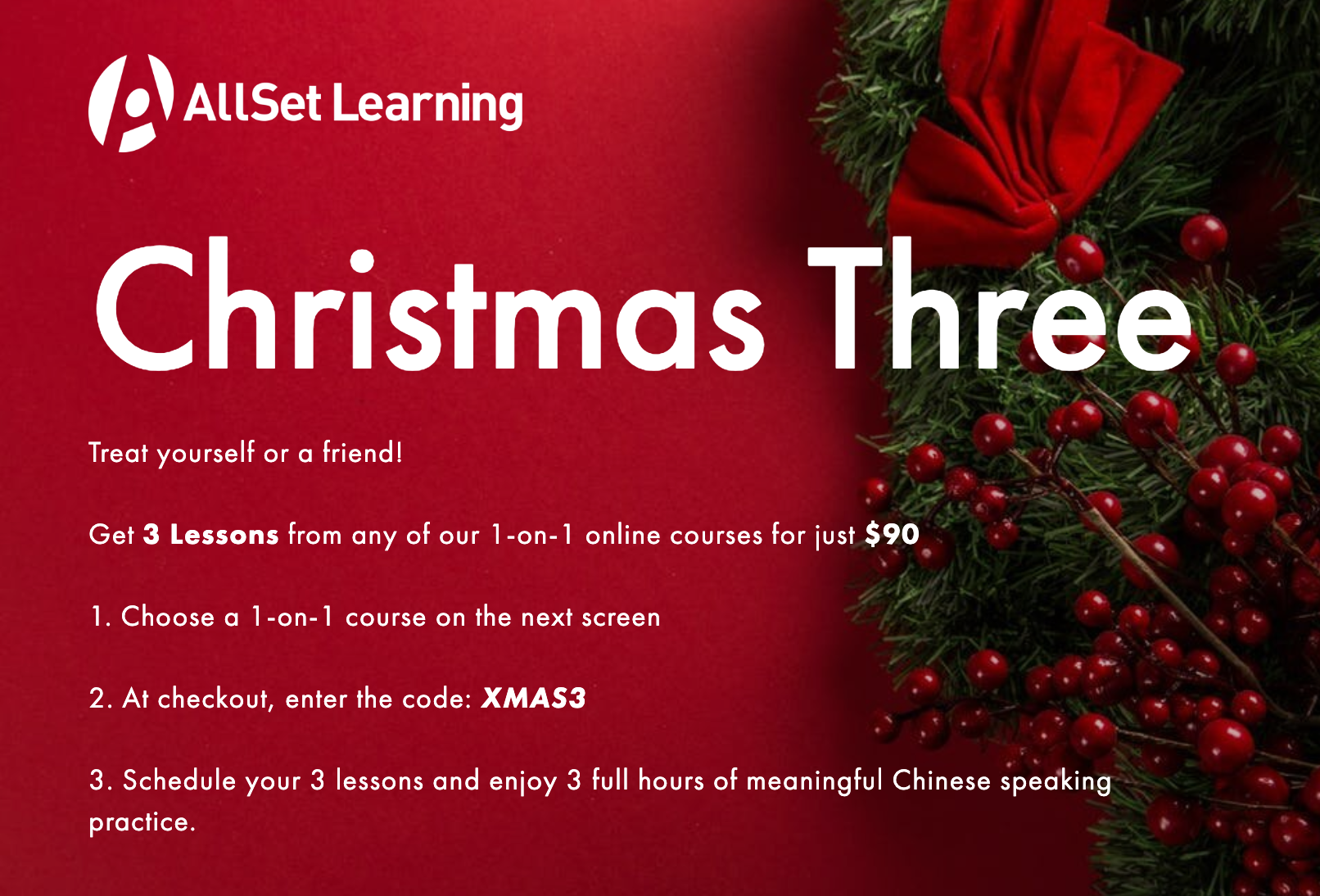 Free Chinese Christmas Songs to Spice Up the Holidays

It’s Christmastime again, and time to remind everyone that Sinosplice still has some awesome familiar Christmas songs in Chinese. This year I’m posting a selection of the MP3 files online in streamable format, so be sure you’re viewing the original post on Sinosplice.com if you’d like to play the songs without having to download everything.

All right, here we goooo…

This is version 1 from the album (Mandarin Chinese):

This song is not part of the album because it is NOT Mandarin Chinese. It’s Hakka. (This one is going to have very limited use for most students; it’s just sort of a novelty for most of us.)

Santa Claus is Coming to Town in Chinese

This one is a kids’ version, version 2, also from the album (Mandarin Chinese):

Santa Claus Is Coming to Town (2)

We Wish You a Merry Christmas in Chinese

This song is especially beginner-friendly for learners of Mandarin Chinese (that chorus!):

We Wish You a Merry Christmas

This one is a Christian classic, of course, version 2 from the album (Mandarin Chinese):

If you want to just grab them all, here you go:

Disclaimer: I don’t own the rights to these songs, but no one has minded this form of digital distribution (in the name of education) since 2006, so… Merry Christmas?

While we’re on the subject of Christmas and Chinese, AllSet Learning (my company) is doing a special offer with our 1-on-1 online Chinese classes. 3 lessons (one hour each) is a great quantity to try it out or gift to a loved one!

This Song Is Not About Mayo

I’ve teamed up with Chinese Buddy on a new song, and this time the grammar point is a very basic one related to saying “have” (有) and “don’t have” (没有). Besides Chinese language, it seems that our collaborations revolve around anti-materialism and food (last time was stinky tofu).

Anyway check it out, and show it to any kids you know learning Mandarin:

Full disclosure: I have no business relationship with Chinese Buddy; we just appreciate each other’s work, and working together is a good complementary fit.

The Grammar of an Ode to Stinky Tofu

I never imagined that collaborating with a musician to create a fun song for learning Chinese grammar would result in a love song to stinky tofu (臭豆腐), of all foods! But that is indeed what happened last week. Check out the result, from Chinese Buddy:

It’s a fun song, and there are two kids in my house (and even an adult or two) that can’t stop humming it. From a grammatical perspective, the use of the verb 要 with various objects is highlighted.

My input into the Chinese learning part of the song was:

Yep, four checks! If you’re a beginner working on basic sentence patterns, I hope you find this song helpful. As for the stinky tofu… well, I’ll leave that up to your own judgment.

Do also check out Chinese Buddy on YouTube. There are a bunch of songs (mostly oriented at children), and the styles of the songs range quite a bit, so don’t judge the music on just one or two songs. Probably my second favorite song would the the Tones Song. (Yeah, I have a thing for tones, and also ukulele music, maybe?)

I was a little late to the party, but I finally saw Disney’s Frozen recently, and was very impressed. Later I did a bit of searching for different language versions of the movie’s hit song, “Let It Go,” and aside from discovering an impressive 25 language mashup version of the song, I also made another interesting find: Chinese dialect (/fangyan/topolect) versions of the song!

Of the videos included below, only the English, Mandarin, and Cantonese audio versions are official Disney productions. The others are fan creations, and as such, vary widely in quality. Some are translations of the original, while others are spoofs (恶搞) or partial spoofs. I’ve got them roughly in order of quality below (the worst at the bottom), so don’t say I didn’t warn you! (Links go to Chinese video sites (with ads); embedded videos are Disney’s official audio versions with fan-added subtitles from YouTube.)

I’m no expert on any of these dialects/fangyan, so if anyone has any corrections to make, please leave a comment.

[Side note: it was kind of weird adding “-ese” or “-nese” to some of those place names, so I used a hyphen to make it clearer which places the dialects/fangan came from.]

If you’re just trying to improve your listening and speaking, you don’t really need to worry about this issue. If you’re working on your writing, however, you’re going to want to get it straight. I found the following (simplified) approach helpful:

OK, yes, it leaves out a lot of special cases, and the aforementioned “Verb” in “Verb + 得” can also be an adjective. But they’re nice rules of thumb if you’re looking for something a bit simpler.

But here’s the interesting thing: because the issue of the three de’s is one concerning writing and not speaking, Chinese native speakers themselves have to learn these rules, and can sometimes get tripped up. Some people who don’t need to write for a living might even just “opt out” of the whole issue and use 的 exclusively.

But because Chinese children have to learn to use the proper “de” in school, there is actually a children’s song about the three de’s! [source]

I find the explanation of 得 a bit suspect. It “comes before adjectives”? Kinda misleading (but then again, so is “after verbs”).

I tried to find an online video of this song, and instead found a very similar but different song also about the three de’s:

The amusing thing about this video is that in at least one place, the subtitles get the “de” wrong. (Can you find it?)

Every year around Christmastime, my “Christmas Songs in Chinese” blog post from 2006 gets a lot of action. I’ve been seeing a lot of requests there for lyrics, and I tried to help out with that, but I found the Chinese versions of these Christmas songs’ lyrics surprisingly difficult to track down. If anyone can offer links to those lyrics, it would be appreciated by many.

Anyway, you may enjoy these Sinosplice Christmas music posts from the archive:

– Christmas Classics in Cantonese (the song link is still good, but the Flash links below are mostly dead now) About a year ago I presented a Hakka version of Jingle Bells and a lot of people enjoyed it. I thought this year I’d share another Chinese take on the Christmas classics. This time it’s a band called Cookies (曲奇) singing in Cantonese (so to me it sounds almost as bizarre as the Hakka song). You have to listen to a bit of Canto-pop before they get into it, but at the 1:26 mark they start singing to the tune of “Santa Claus Is Coming to Town,” followed immediately by “Jingle Bells,” then “Joy to the World,” “Hark! the Herald Angels Sing,” “Deck the Halls,” “Come All Ye Faithful,” “Silent Night,” and finally “We Wish You a Merry Christmas” (don’t be alarmed when they only slip into English briefly during those last two). It all has a very bizarre Canto-pop hyperactive feel to it.

While I’m at it, I thought I’d throw in some Chinese Christmas flash fun as well. Check out these links (also found through Baidu):

– What do Santa Claus and a skiing alien accompanied by snow pigs have in common? Watch this “origin of Santa Claus” cartoon to find out.
– Chinese Jingle Bells Rap. Nuff said.
– 圣诞结 (that’s someone else’s pun, not my 错别字), the most depressing Christmas song ever. It has lyrics like, “of all the people I’ve loved / not a single one is left by my side / only loneliness keeps me company throughout the night / Merry, Merry Christmas / Lonely, Lonely Christmas.” On this joyous holiday, this is a great song to remind you how miserable it makes some people. (Note that for many modern Chinese, Christmas is seen as a day to be with a boyfriend/girlfriend).
– Hit Santa with a Snowball. This game is not fun, it’s just hilarious to me because the animation is so awful and the “music” has about a 3 second loop. Well, that and the fact that you get presents out of Santa by knocking him silly with snowballs.
– Santa does Mission Impossible. And also some Chinese song covers.