FluentU has quickly become the most talked-about video service for learning Chinese online. The site sports a clean, modern feel, and the team have been very responsive over the past year, as user feedback has informed a number of nice changes. Although I’ve been following FluentU’s development (and even met with the founder a while back), I haven’t reviewed the service myself until recently. It’s not a coincidence; I’m actually a bit skeptical of video-based learning (it’s really hard to get right), and I wanted to wait until FluentU got a few more features out before I reviewed the service.

For the most part, I’m going to assume that most of my readers have already heard about FluentU (it’s certainly not new anymore!), and I won’t provide an in-depth introduction to how the service works. This is part 1 of a 2-part series.

Why video? This is a really important question. Working at ChinesePod, we were often confronted with the “why don’t you guys do video?” question. The logic seemed to be: “if audio is good, video is better.” ChinesePod has done a few experiments in video over the years, but never fully committed to it. The reasons are:

1. Professional video is much more labor-intensive than audio (by a factor of 5-10)
2. Users often say they want video, but don’t really want to pay extra for it (poor ROI)
3. Many users use audio material in a way that doesn’t work with video (e.g. listening while working out, or while driving)

What conclusions can I draw from this? Not a whole lot. Maybe video is just not a good fit for the ChinesePod brand. Building up a big fanbase over years and years, all centered on audio, probably doesn’t naturally lead to demand for video. If ChinesePod were to really commit to doing video, it would have to be a concerted, long-term effort, and more than just a few experimental videos.

FluentU, on the other hand, has focused on video from the start. In its early days, it utilized tons of clips from YouTube, which meant its resources could go into translation, vocab management, and other tools (rather than video production). More recently, FluentU has started producing its own professional video content.

Video is great for providing the full visual context of language, including both cultural elements and body language. This is especially powerful for learners not in China (learners which can also take advantage of the unblocked internet and faster speeds for viewing FluentU videos).

FluentU does a great job of presenting video. The player is great, right down to all sorts of tiny details. If you know FluentU at all, you know this, so I won’t say too much here. 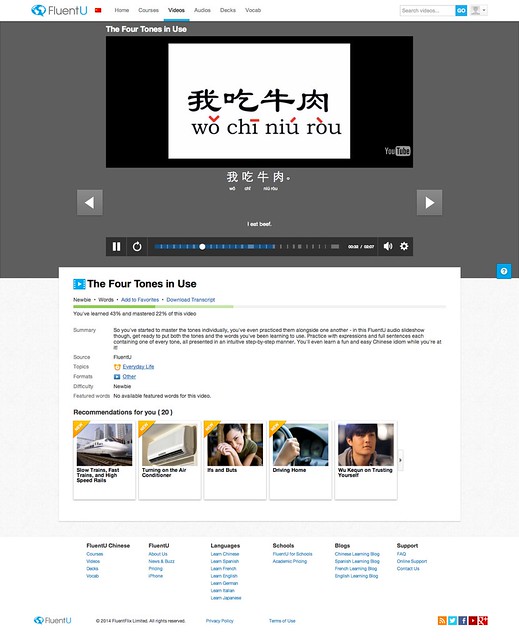 1. Being able to loop a specific clip within a video.
2. Color coding in the video timeline so you can see where the dialog happens in the videos and where there’s no speaking going on.
3. Hovering on the subtitles automatically pauses the video, so you can check the meanings or pinyin of the words you’re hearing.
4. When you first select a video, you’re presented with the entire video transcript up front (which you can also download). This is especially useful for intermediate and above; if you can read enough to get the gist of the transcript, you don’t have to suffer through 5 minutes of a video before discovering it’s not what you want.

But there’s a catch… because FluentU makes extensive use of YouTube, it doesn’t work flawlessly in China. I have a VPN, of course, but it’s still a little slow. It’s usable, but the lag is quite annoying, I must admit. I imagine using FluentU on a fast (unfiltered) internet connection would be pretty awesome, though.

The is one of the key features I want to focus on. It wasn’t around in FluentU’s early free/beta days, and it has a lot of potential. Basically, “Learn Mode” is FluentU’s take on SRS, an idea which isn’t so great all by itself, but holds a lot of promise for enhancing other methods of learning.

When you choose a FluentU video at your level that you’re interested in, you can choose between “Watch” and “Learn.” “Watch” is just watching the video, as expected. “Learn” takes you to a new interface which is focused on figuring out which words in the video you actually know, and familiarizing you with the ones you don’t know. This process should feel very familiar to anyone who’s used Anki or other SRS vocabulary review software, but FluentU has done its own take on SRS. 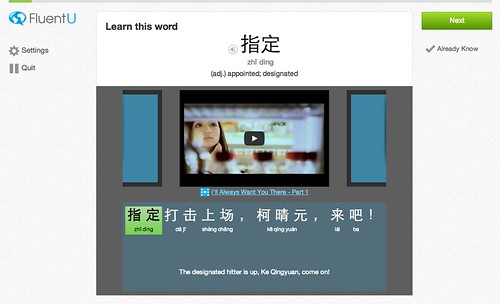 When you don’t “know” a word, you have the option of watching one or more short video clips which include the word. It’s a very cool cross-section of the word in action across all kinds of video content and contexts. Imagine that all those sample sentences you love so much in your favorite dictionary (or Chinese Grammar Wiki) were all mini video clips. That’s what it does, complete with transcript for each individual sentence.

After you “learn” the word and continue, the system will cycle back and test you on the words you should have “learned.” There are multiple-choice questions, fill-in-the-blank, and straight-up translation mini-quizzes for each word. 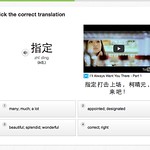 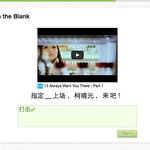 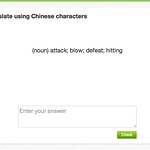 So I’m totally on board with the idea of extending SRS into something more interesting, and I like seeing innovation around the boring SRS model, but there are a few issues (which I’m sure FluentU is working on). First, if you’re in China using a VPN, the lag issue is even worse for these tiny clips than for the full videos.

Second, the “Learn this word” vs. “Already Know” dichotomy may be a little hard for some types of learners to deal with. There are just so many words we learners are working on in learning, which fall in that fuzzy region somewhere between “Learn this word” (as if it were new) and “Already Know,” that being forced to choose may be just a little agonizing.

If you choose “Already Know,” then BAM, that word is forever (?) on your “known” list, which might make you feel like you damn well better know it before clicking “Already Know.” Perhaps that’s the idea: getting you to browse clips more, and make fuller use of FluentU’s archive of annotated video. Fair enough. I just think it will be hard for some users (read: super-serious learners with perfectionist tendencies, like I used to be) to confidently click on “Already Know.” 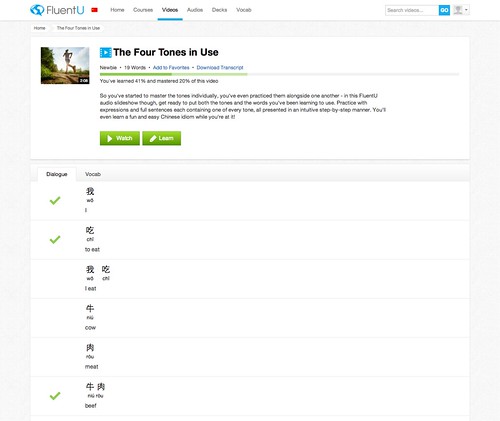 One thing is for sure: the “Learn” mode offers a much more focused way to “study” FluentU’s video content, rather than just casually browsing. It really is a very different experience from the site’s main video-watching experience, more similar to a quiz than enjoying a TV show. I can see how this might attract some users and turn off others.

If FluentU can get “Learn” mode right and get more users actually using it, it has huge potential. Any learning service that can accurately determine what its users “know” is very well poised to offer an amazing, personalized learning experience. Right now, FluentU offers a little green strip next to every video displaying what is “known” (based on feedback from “Learn” mode). There’s a lot of potential here. 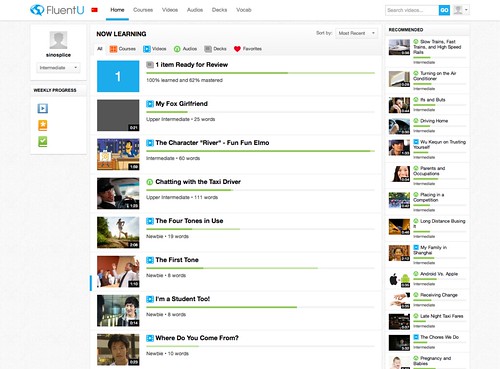 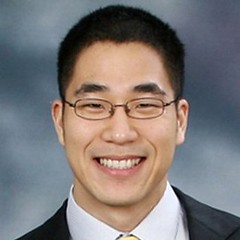 Me: The FluentU video player is fantastic! How did you design/develop it?

Alan: Thanks for the kind words! We designed/developed it through the same way that we develop the rest of the site: by going back and forth with our users and adjusting based on feedback, until they loved it. And then adjusting it some more.

FluentU has some great video content, but it seems to also be branching out into audio too. Are you having second thoughts about a “pure video” approach?

Alan: Our team doesn’t have many “sacred cows.” We experiment a lot and are always trying new things to make the best language learning site possible. We started with real-world videos because video has many advantages. Video is exciting, and it opens your eyes to a whole new world and culture. People talk naturally on video. It’s memorable and helps words stick. And most of all it’s fun. On the other hand, audio has 2 huge benefits: it’s cheaper to create than video, and it doesn’t require as much active engagement for the user as video. We’ve found that there is definitely a place for audio alongside video.

Is FluentU primarily aimed at individual self-study learners, or at schools and other institutions?

Alan: Our focus is individual learners, but many schools and institutions tell us that their students are loving FluentU.

You’ve launched other languages on the FluentU platform. What does this mean for Chinese? Will Chinese get any “special treatment” going forward, or are new features now “all or nothing”?

Alan: Chinese is our first language, so it will always get “special treatment.” And by virtue of the fact that there is pinyin and Chinese characters there is no way around it. Besides, it’s my favorite foreign language.

The “Learn” feature on FluentU is a unique take on spaced repetition. Is it popular with your users?

What’s next for the “Learn” feature?

– FluentU has a great, learner-centric video player with awesome features and real attention to detail
– FluentU may not work well in China, even if you have a VPN
– FluentU has “Learn” mode, which may not be for all users, but it definitely takes FluentU well beyond “a site with a bunch of videos,” and looks very promising

In part 2 I’ll be looking at the FluentU-produced video series, with a more in-depth interview with Content Director Jason Schuurman.