I’ve been listening to a series of lectures called Philosophy of Mind: Brains, Consciousness, and Thinking Machines. A lot of these concepts I’ve read about before, but it’s nice to have everything together in a coherent set. One of the topics covered refers to the Chinese Room, an anti-AI argument devised by philosopher John Searle: 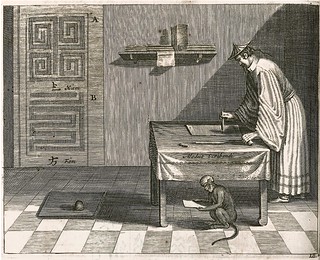 > Searle writes in his first description of the argument: “Suppose that I’m locked in a room and … that I know no Chinese, either written or spoken”. He further supposes that he has a set of rules in English that “enable me to correlate one set of formal symbols with another set of formal symbols”, that is, the Chinese characters. These rules allow him to respond, in written Chinese, to questions, also written in Chinese, in such a way that the posers of the questions – who do understand Chinese – are convinced that Searle can actually understand the Chinese conversation too, even though he cannot. Similarly, he argues that if there is a computer program that allows a computer to carry on an intelligent conversation in a written language, the computer executing the program would not understand the conversation either.

> The experiment is the centerpiece of Searle’s Chinese room argument which holds that a program cannot give a computer a “mind”, “understanding” or “consciousness”, regardless of how intelligently it may make it behave. The argument is directed against the philosophical positions of functionalism and computationalism, which hold that the mind may be viewed as an information processing system operating on formal symbols.

So my first thought was: what do the Chinese call the Chinese room? The laowai room? Turns out the answer is a little more boring than that: in Chinese it’s called the 中文房间. (You might have been tempted to translate it as the 中国房间, but that doesn’t work as well, since the whole part of the argument is that there are these inscrutable symbols that can be manipulated. It’s Chinese characters that are key, not Chinese culture or nationality.)

The room is “Chinese,” of course, because of the inscrutable nature of Chinese characters. It boosts the argument if it feels like there’s no chance that the person in the room will actually learn them in the process of their Chinese room work.

I have to take umbrage at that: you can read Chinese. (If you want to.) I admit, though, that the Chinese room is not the best way to go about it.

There’s one other thought experiment mentioned which touches on China: the China brain. That one doesn’t seem to have a well-known translation (and no page on Wikipedia), but it seems at least some translators have gone with the straightforward 中国脑子. (This one refers to the people of China, and not the Chinese language itself.)