Ofo Rental Bikes Are Getting OWNED

I’ve recently commented on how the sudden rise of app-driven bike rental services in Shanghai is fairly staggering. From a casual look around the downtown area, it’s clear that Mobike and Ofo are currently the top dogs, and Ofo seems to be doing all right with its “cheaper” business model, despite its late entrance to the market. But I’ve recently learned that Ofo’s service has some pretty glaring flaws when compared to Mobike.

How Mobike and Ofo Differ

Both services use apps, but Mobike’s bicycles are more high-tech, and that makes a big difference. Mobike bikes have tracking devices embedded, and the bike locks are unlocked remotely through the network. Ofo bikes use simple combination locks that you can request the code for through the app.

(Note: I don’t use Ofo myself, but I’ve spoken with people who do. Ofo bikes also have QR codes on their bikes, but they’re for the purpose of advertising the app, not unlocking the bikes. The Mobike QR codes serve both purposes.)

It seems like the Ofo system is fairly straightforward and would save a lot of money, right? Oh, but it has problems…

Because Ofo uses combination locks, none of the bike locks are truly locked unless the last user changed the combination after closing the lock. And, it turns out, a lot of people don’t. A good number of Ofo bikes on the street are actually unlocked, if you just press the button on the lock.

When I first heard this, I was skeptical, but the very first bike I tried was unlocked. Later, I checked a sample of 20 bikes in the Jing’an area, and 4 were unlocked. So, 1 in 5. That’s a lot!

As it turns out, this isn’t Ofo’s worst problem, though… 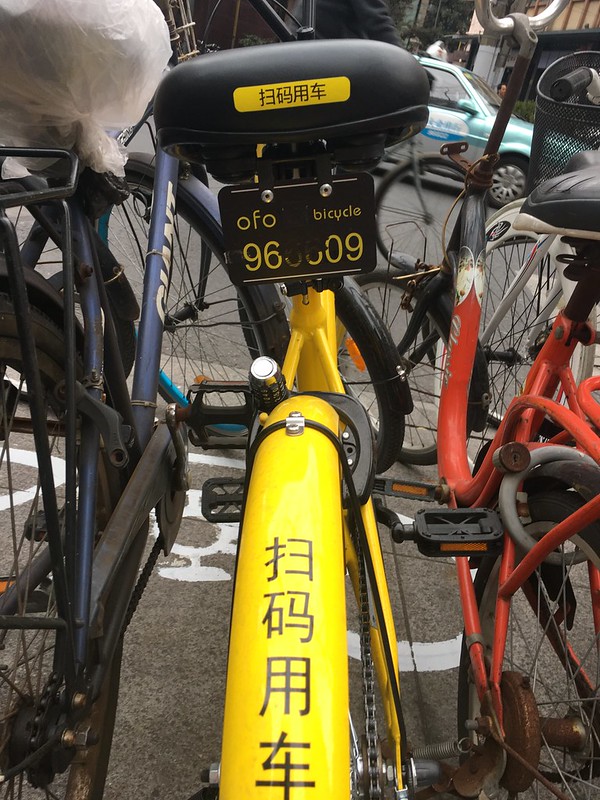 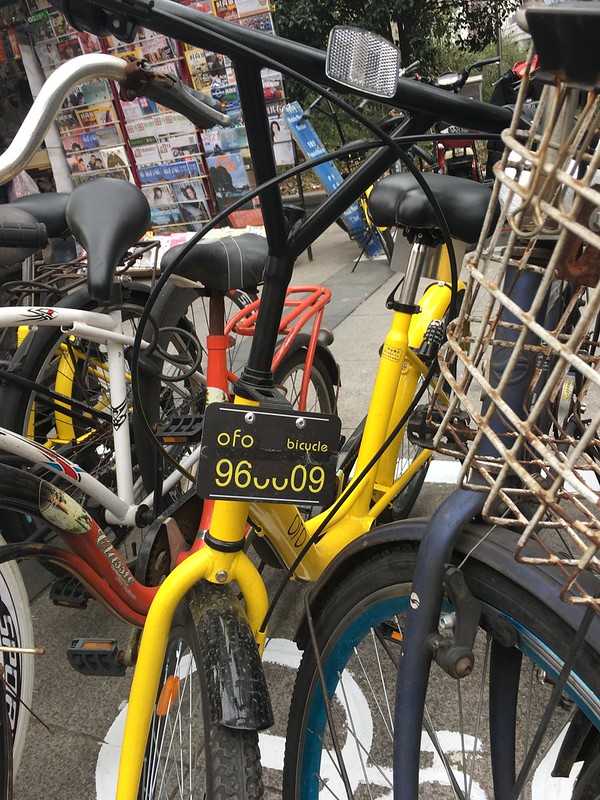 So this is how people are “owning” Ofo bikes. They’re getting the combination to a particular bike, and then scratching off or otherwise removing the bike’s ID number. I did a bit of hunting for “owned” Ofo bikes parked on the street, and did find a few. Logically, though, the “owned” bikes are probably going to be parked in less public places. I really wonder how many Ofo bikes have disappeared off the street. 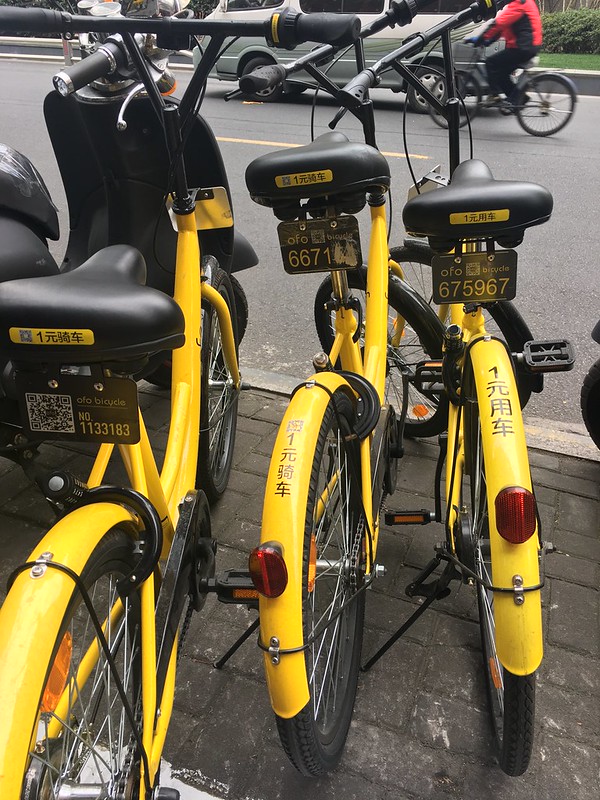 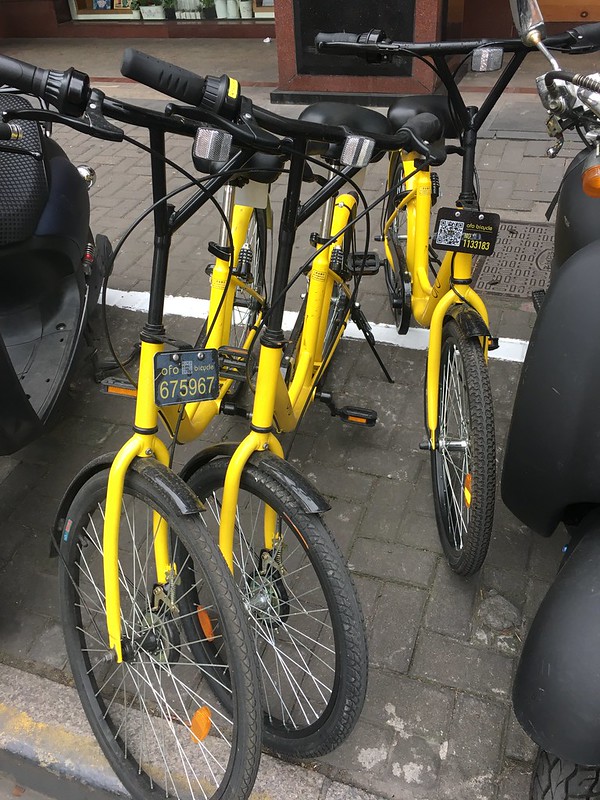 I also wonder if this aspect of the “cheap bike” strategy has already been taken into account. Ofo has ample funding, after all. How many bikes can Ofo afford to lose and yet still have lower costs than Mobike, with its fancy high-tech bikes? Or, how many Ofo bikes need to be stolen before people realize that it’s easier (and not at all expensive) to just leave the bikes in the system? How long does it take before “owning” a ripped-off Ofo bike is uncool and/or shameful? Hard to say… and there are a lot of people in Shanghai!

The other day near Jing’an Temple I snapped this shot of a few guys slowly escorting a “cargo tricycle” full of Mobike bicycles. The strange thing was the two of them were riding Ofo bikes! 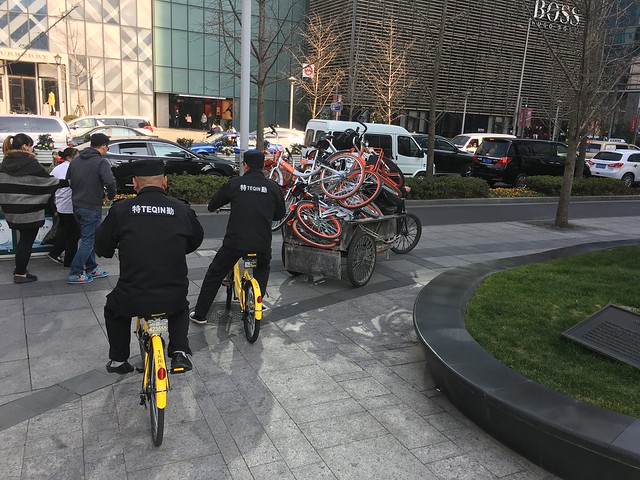 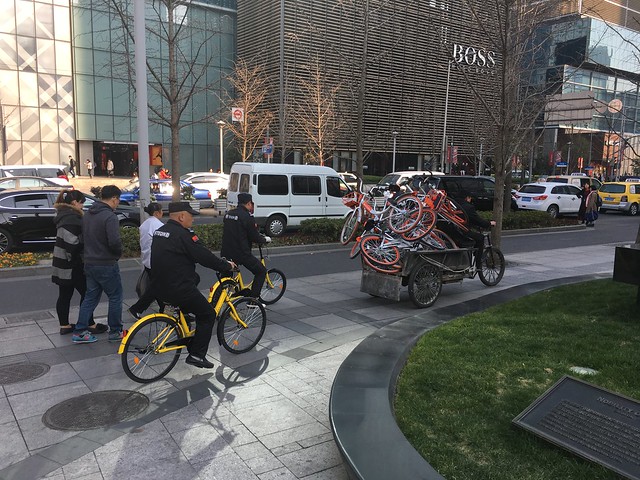 I was in a hurry, so I didn’t even try to ask them any questions, but the guys were wearing clothes which read 特勤, which is probably short for 特殊勤务, something like “special forces” (a division of the police).

At least one Chinese person I showed these pictures to thought the uniforms looked fake, but who knows?