A while back I wrote about What 80% Comprehension Feels Like, and I quoted the English examples used in Marcos Benevides’ excellent presentation which simulate 80% comprehension in English by including made-up English-like vocabulary words.

I’ve been thinking about that presentation a lot, both about the impact of such a demonstration, as well as about how it could be accomplished in Chinese. I ended up creating my own examples in Chinese. I’ll go ahead and share that first, and follow up with some discussion of the considerations involved.

(Before you attempt to read the following, please note that if your Chinese is not at least at an intermediate level, the following exercise is not going to work. Like its English-language counterpart, these examples are most effective with native speakers.)

The tricky thing about reading Chinese is that it’s not just a matter of vocabulary and grammar; there’s an issue not present in English: the issue of Chinese characters. When a learner reads a difficult Chinese text, all three of these components tend to play a part in the difficulty: vocabulary, grammar, and characters.

But for the example to work for both learners and native speakers alike, there needs to be a way to guarantee that parts of the text were incomprehensible, as accomplished with made-up words in English. How can one do this in Chinese?

How I did it

First of all, to maximize the chances that the “intelligible” parts of the Chinese sample text are also readable by learners, I used as simple a text as I could: a Level 1 Mandarin Companion graded reader. For these examples, it was The Secret Garden.

Then, I had to be sure I chose the more difficult content words to swap out, and that I got all instances of them in each sample. Obviously, I had to count the words to make sure I got the desired percentage right. But equally important, to make my samples representative of real-life 98%, 95%, and 80% comprehension experiences, the words chosen should “cloud” reading comprehension to the appropriate degree, no more, no less.

But here’s the tricky part: how to represent characters the reader doesn’t know. The obvious way would be to create my own characters that don’t really exist. I enjoy doing this, but it’s time consuming, and to make it look truly credible it would have to not stand out at all when mixed in with the other characters. Too much work.

So I turned to the Unihan database of Chinese characters. Over the years, more and more obscure characters have been added to this set of characters, and I found a list of the most recent additions. (Most recently added should mean most obscure, but I chose Extension D from this page because it was both recent and a small download.)

A quick check confirmed that these characters were indeed obscure, but many of them didn’t look like simplified Chinese characters, or were just too weird, so I had to choose carefully. After making my choices, I also had to check to make sure that educated Chinese adults didn’t recognize the characters (guessing doesn’t count).

After that, I selectively swapped out characters in the samples. (My 80% comprehension text sample is the shortest, because I was running out of “good” obscure characters, and I didn’t want to have to find more!)

One interesting side effect of using such obscure characters in my texts was that most software couldn’t render them. Whatever fonts they used just didn’t include those bizarre characters. Only Wenlin, with its custom font designed to render all kinds of obscure characters, could display them all. So I had to do screenshots of Wenlin’s interface.

How to use this 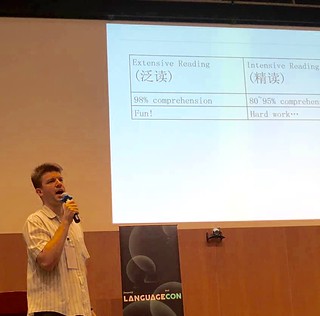 I used these passages as part of a presentation on extensive reading at LanguageCon in September. I got the effect I wanted: Chinese members of the audience giggled (embarrassedly?) at the characters they didn’t know, especially when they got to the 80% comprehension example.

Chinese learners smiled wryly: there wasn’t much amusing about a fake recreation of the challenge they face on a daily basis, trying to read Chinese.

More than anything, I hoped that the Chinese audience could empathize with the learners of Chinese. Most Chinese people never know what it feels like to have to learn so many foreign characters as a part of a foreign language learning experience. Through these examples, though, they can get an inkling.

Actually, maybe they were chuckling in relief… at least they’ve got that challenge behind them.

The AllSet Learning blog also has a similar Chinese language article on this topic: 80%没有你想的那么多.