16 Sincere Answers to 16 Tiresome Questions about Life in China

I recently read an article titled 16 Things Expats in China are Tired of Hearing Back Home. My immediate reaction was: this is so on the money. I have definitely heard all of these. Having just spent 3 weeks in the States, I have very recently heard many of these.

But rather than simply sharing this list, I thought it might be useful to give my sincere answers to these questions, because none of them are really stupid questions. They’re just kind of hard to answer briefly. So I’ll answer, but occasionally take the easy way out by linking to old entries of mine.

So, without further ado, here we go…

This is the most common and hardest one to answer. It would be interesting to see a bunch of different long-term expats answer this in 200 words or less. Or maybe in haiku form. Anyway, it’s a tough question because it’s way too broad. But I actually do get why people ask this, and I think the motivation is good, so I’ll attempt to answer (and you can also see what people say on Quora). 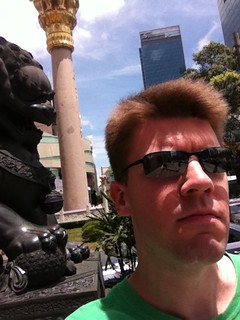 The one time I really tried to answer this question was in a blog post I wrote in 2006 called The Chaos Run. In that post, I described “a near-perpetual state of excitement.” This place really is seething with energy.

Obviously, living in China is not all fun and excitement. Expats complain about life here a lot, and don’t tend to stay too long. An apt description of life in China is that these are “interesting times.” Just as the supposed Chinese curse implies that “interesting” is not always positive, neither is life in China. “Interesting” is good food, amazing work opportunities, and great people, but it’s also food safety issues, pervasive pollution, and infuriating social interactions. How much of the good and the bad you end up with depends largely on where you live in China, what you do here, whether you’re here alone or with a family, what you expect to get out of your stay here, and a bunch of other factors. And, of course, there’s the element of luck and the undeniable role of your own attitude about the experience.

2. “Wow, that must have been a really long flight!”

Yeah, I typically fly 13-14 hours just to get to the States from Shanghai, and then another 3-5 hours in the air to get home to Florida. I have learned that flying into California is no good, because I always need two more flights to get to Florida, and adding in the layover time, that will nearly always results in a trip over 24 hours! (It usually takes me 20-22 hours to get home, though.)

Yes. I knew some broken Chinese before even coming over in 2000, but I wasn’t even conversational, really.

And yes, I would say that learning Chinese is hard. But it’s worth it.

4. “So you must be really fluent in Chinese now.”

Fluent enough. You can read about how I learned Chinese here on this website.

I wanted to see the world and learn languages while I was young! I kind of got hung up on the first country I stopped in, though, and I’ve been here ever since. No regrets.

6. “I heard the pollution in China is really bad!”

It is very bad. Beijing and other northern cities are way worse than Shanghai, but it’s not great anywhere.

I am personally not bothered by it here in Shanghai on a daily basis. I’m not as sensitive as some people to the pollution, even if I’m breathing in potentially harmful air 24/7. I would not want to live in Beijing, however, mostly for this reason (it’s a very cool city otherwise).

7. “I heard that in China [insert widely reported misconception]. Is that true?”

I don’t really mind questions like this too much, because I frequently hear crazy things this way that I’ve never heard while living in China. And honestly, truth is stranger than fiction. I hear bizarre stories every day about what’s going on in China. (It’s “interesting” here, remember?)

Websites like Shanghaiist cover this aspect of life in China pretty well. If you want more serious China news, check out Sinocism.

I hear this question from Chinese people much more than from foreigners. Chinese people who don’t have much contact with foreigners are often surprised to see a foreigners using chopsticks. I usually inform them that it’s pretty easy to learn chopsticks, lots of foreigners can do it, and then I quickly change the subject.

9. “Do they have [insert foreign brand] over there?”

Some of the most common western brands you see everywhere are: Starbucks, KFC, Pizza Hut, McDonalds, Nike, Apple. This topic is too big for me, though. Here are a few articles on the topic:

10. “Do you ever get culture shock over there?”

Not really. I do have my bad days in China, but that’s to be expected, right?

I’d say it’s probably a good idea to expect culture shock, but actually, the less you expect at all, the less shocked you are. I arrived in China as a wide-eyed 22-year-old full of wonder, and just took it all in.

11. “What do Chinese people think of [insert foreign brand/person/country]?”

So what I’m saying is: you’ll find all kinds of opinions on any topic. That’s why the Sinosplice tagline is “Try to understand China. Learn Chinese.” The more people you can talk to, the more you’ll be able to appreciate the diversity of opinions and ideas here in China.

Again, lots of opinions here. Many people think he’s an idiot, and many think he’s an accomplished businessman. I wrote about this a bit last year.

14. “So how much longer do you think you’ll stay over there?”

Most expats arrive in China without expectations to stay too long, and most only last a year or two. (The “interestingness” can get overpowering.) I was originally my plan to only stay 1-2 years as well, but eventually I decided to stay indefinitely.

I anticipate I’ll be spending some part of the year in China for the rest of my life, but I do plan to spend more and more time in the States, as I have started doing in recent years. I want my kids to spend more time with my parents, and to absorb some more American culture. Trips to the U.S. are also becoming increasingly important for my businesses, AllSet Learning and Mandarin Companion.

One common trend among expats in China is that once they have kids, they tend to leave so that they can put their kids in school in their home countries. (Even the Chinese who can afford it are trying to put their kids in school outside of China, and it’s becoming really common for high school, even, among families that can afford it.) My kids are 5 and 2 now, so there’s not a huge rush, but it is a factor too.

Once you marry into China, there’s no “coming back for good,” as far as I’m concerned.

These questions are starting to sound like my mom.